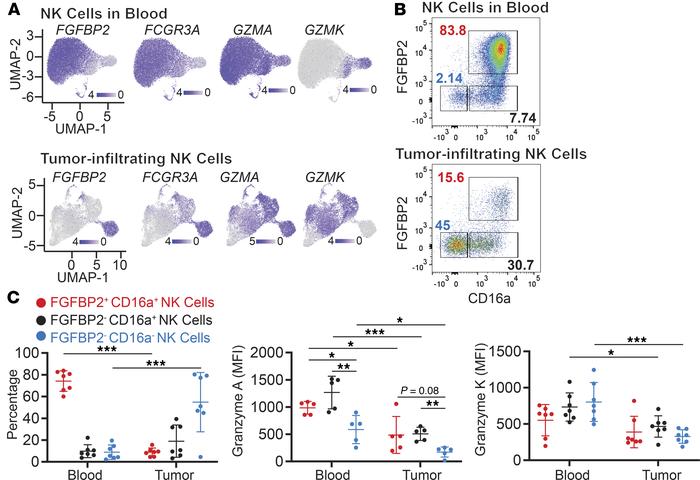 () Expression of genes used for identification of NK cell populations ( and ) and effector molecules ( and ). The intensity of the blue color indicates the level of expression for selected genes in individual cells and is scaled separately between blood and tumor-infiltrating NK cells within the integrated data set from 5 patients. () Validation of 3 NK cell populations identified by scRNA-seq in blood samples by flow cytometry using FGFBP2 and CD16a as markers. NK cells were identified by gating on CD45+ and CD56+ cells that were negative for CD3ε, CD19, CD14, CD15, CD163, and a dead cell marker. A representative analysis is shown for patient CY165. () Quantification of 3 NK cell populations in blood and tumor samples based on FGFBP2 and CD16a markers. Labeling for granzymes A and K is also shown for each of the 3 populations. The genes named and encode the proteins CD16a, FGFBP2, granzyme A, and granzyme K, respectively. Each dot represents an individual patient. MFI, mean fluorescence intensity. Statistical analysis was performed by 2-way ANOVA, Bonferroni’s post hoc tests; * < 0.05, ** < 0.01, *** < 0.001.