While gene transfer using recombinant adeno-associated viral (rAAV) vectors has shown success in some clinical trials, there remain many tissues that are not well transduced. Because of the recent success in reprogramming islet-derived cells into functional β cells in animal models, we constructed 2 highly complex barcoded replication competent capsid shuffled libraries and selected for high-transducing variants on primary human islets. We describe the generation of a chimeric AAV capsid (AAV-KP1) that facilitates transduction of primary human islet cells and human embryonic stem cell–derived β cells with up to 10-fold higher efficiency compared with previously studied best-in-class AAV vectors. Remarkably, this chimeric capsid also enabled transduction of both mouse and human hepatocytes at very high levels in a humanized chimeric mouse model, thus providing a versatile vector that has the potential to be used in both preclinical testing and human clinical trials for liver-based diseases and diabetes. 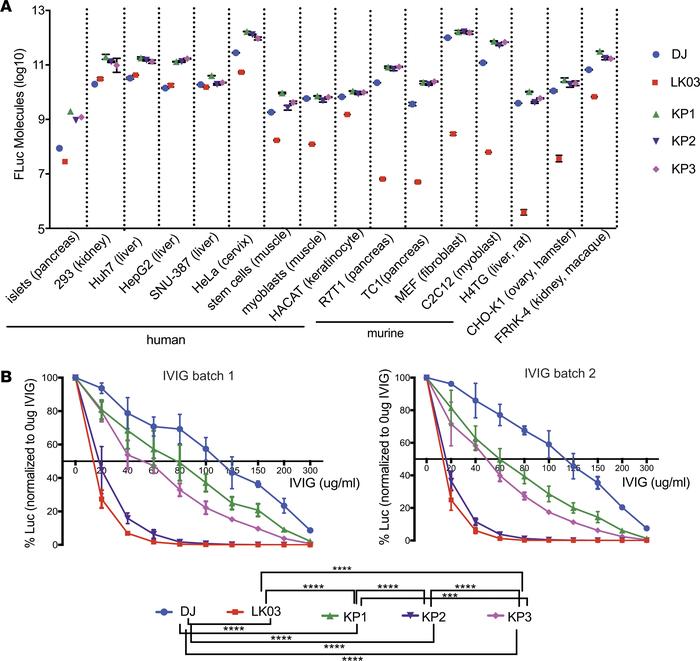 () Transduction efficiency of the capsids, as well as AAV-DJ and AAV-LK03 capsids, on a variety of human- and nonhuman-derived cell types. Cells were transduced with the different capsid containing rAAVs that were packaging a FLuc expression cassette at a MOI of 1,000 in triplicate (with the exception of islet cells), and cell lysates were analyzed 48 hours after transduction in a luciferase activity assay. For primary human islet cells, results of 1 experiment that had been performed twice are shown. Two-fold dilutions of recombinant FLuc enzyme were used to prepare a standard curve, and raw luminescence units were calculated into luciferase molecules based on the standard curve. () Neutralization assay of rAAVs packaged with different capsids using dilutions of 2 different batches of pooled human immunoglobulin (IVIG). Huh-7 cells were transduced at a MOI of 100 with FLuc-expressing rAAVs that had been preincubated with different concentrations of IVIG for 1 hour at 37°C. Luciferase activity in cell lysates was measured 24 hours after transduction. Mean values of 5 replicates (obtained in 2 independent experiments) with SDs are shown for each sample. Experimental values were assessed via 2-way ANOVA using Tukey’s multiple comparisons test. Only statistically significant differences are indicated in the legend below the graph. *** < 0.001, **** < 0.0001.