Interleukin-1β (IL-1β) is a key proinflammatory cytokine involved in the progression of many autoinflammatory and autoimmune diseases, including autoimmune inner ear disease (AIED). IL-1β inhibition has been shown to result in clinical hearing improvement in a small cohort of corticosteroid-resistant patients with AIED. Canonical processing of pro–IL-1β by caspase-1 generates an active 17-kDa fragment, capable of instigating a proinflammatory microenvironment. However, in response to LPS, PBMCs from patients with AIED uniquely express a 28-kDa IL-1β fragment, as compared with PBMCs from control subjects. We synthesized and compared the biologic activity of the 28-kDa fragment to the 17-kDa IL-1β product and the pro–IL-1 31-kDa protein. The 28-kDa IL-1β fragment induces IL-6, TNF-α, and CCL3 in PBMCs. Uniquely, only caspase-7 treatment showed a dose- and time-dependent increase in 28-kDa band generation. Mass spectrometry confirmed the putative caspase-7 cleavage site of pro–IL-1β, which was used to generate the 28-kDa fragment used for PBMC stimulation studies. Collectively, these results provide insight into the function of a poorly understood, processed 28-kDa form of IL-1β in patients with AIED that is uniquely generated by caspase-7 and is capable of activating further downstream proinflammatory cytokines. Further investigation may provide novel pharmacologic targets for the treatment of this rare disease. 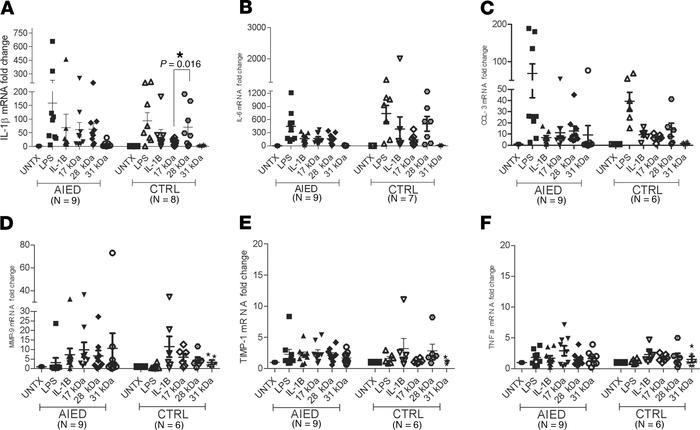 Expression levels of () IL-1β, () IL-6, () CCL3, () MMP-9, () TIMP-1, and () TNF-α mRNA from PBMCs of patients with AIED ( = 9) and controls ( is shown for each panel) treated with 1 μg/mL LPS (positive control); recombinant IL-1β (rIL-1β) (Peprotech); or 17-kDa, 28-kDa, and 31-kDa (negative control) fragments of IL-1β or left untreated. The expression levels were measured in replicate samples by real-time quantitative PCR (qPCR) using 480 LightCycler. Data shown are mean ± SEM. The threshold cycle (Ct) value was calculated from amplification plots, and gene expression was normalized using the Ct of the housekeeping gene glyceraldehyde-3-phosphate. Fold induction of the target gene was calculated using the formula 2−ΔΔCt. Statistical significance was achieved for the difference in expression for IL-1β in response to the 28-kDa and 17-kDa fragments in control subjects ( = 0.016). Although differences were observed between expression in response to the 28-kDa and 17-kDa fragments for IL-6 and CCL3, these did not achieve significance. MMP-9 and TNF-α expression showed minimal, insignificant changes in response to the IL-1 fragments. The Wilcoxon signed-rank test was performed for paired observations, to compare expression levels within groups, in response to the 17-kDa and 28-kDa fragments. For the pairwise comparison of 17-kDa and 28-kDa fragments, a Bonferroni’s adjustment was made for the 2 hypothesis tests carried out within a cytokine. The 2 tests were carried out comparing 17-kDa and 28-kDa fragments within the AIED group and within the control group, such that any given comparison required < (0.05 / 2) = 0.025. Each experiment was repeated twice to confirm reproducibility.