Serine/threonine phosphatase PP2A is essential for optimal B cell function

Serine/threonine phosphatase PP2A is essential for optimal B cell function

Protein phosphatase 2A (PP2A), a serine/threonine phosphatase, has been shown to control T cell function. We found that in vitro–activated B cells and B cells from various lupus-prone mice and patients with systemic lupus erythematosus display increased PP2A activity. To understand the contribution of PP2A to B cell function, we generated a Cd19CrePpp2r1afl/fl (flox/flox) mouse which lacks functional PP2A only in B cells. Flox/flox mice displayed reduced spontaneous germinal center formation and decreased responses to T cell-dependent and T-independent antigens, while their B cells responded poorly in vitro to stimulation with an anti-CD40 antibody or CpG in the presence of IL-4. Transcriptome and metabolome studies revealed altered nicotinamide adenine dinucleotide (NAD) and purine/pyrimidine metabolism and increased expression of purine nucleoside phosphorylase in PP2A-deficient B cells. Our results demonstrate that PP2A is required for optimal B cell function and may contribute to increased B cell activity in systemic autoimmunity.

Increased PP2A expression and enhanced function in activated B cells or B cells from lupus-prone mice and SLE patients. 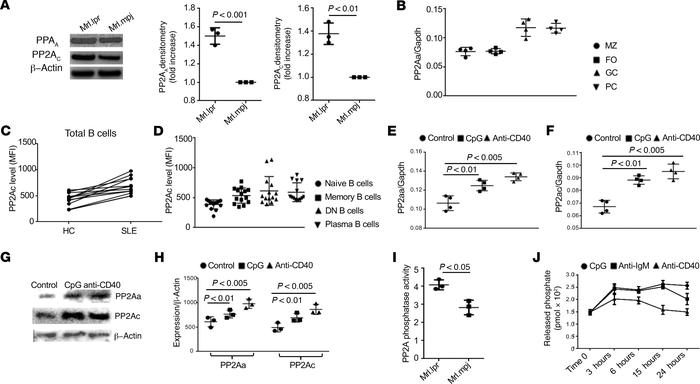