Atrial fibrillation (AF) is the most common heart rhythm disorder and a major cause of stroke. Unfortunately, current therapies for AF are suboptimal, largely because the molecular mechanisms underlying AF are poorly understood. Since the autonomic nervous system is thought to increase vulnerability to AF, we used a rapid atrial pacing (RAP) canine model to investigate the anatomic and electrophysiological characteristics of autonomic remodeling in different regions of the left atrium. RAP led to marked hypertrophy of parent nerve bundles in the posterior left atrium (PLA), resulting in a global increase in parasympathetic and sympathetic innervation throughout the left atrium. Parasympathetic fibers were more heterogeneously distributed in the PLA when compared with other left atrial regions; this led to greater fractionation and disorganization of AF electrograms in the PLA. Computational modeling revealed that heterogeneously distributed parasympathetic activity exacerbates sympathetic substrate for wave break and reentry. We further discovered that levels of nerve growth factor (NGF) were greatest in the left atrial appendage (LAA), where AF was most organized. Preferential NGF release by the LAA — likely a direct function of frequency and regularity of atrial stimulation — may have important implications for creation of a vulnerable AF substrate. 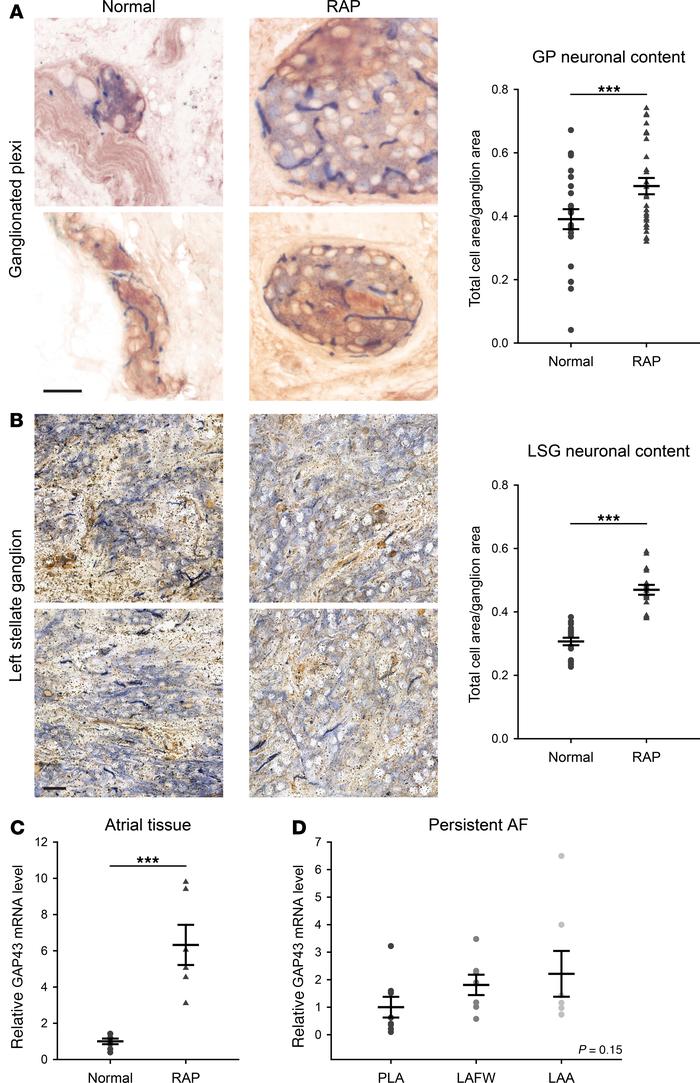 () Representative micrographs of IHC for AChE (brown) and DBH (blue) of left atrial ganglionated plexi (GP) and () left stellate ganglion (LSG) of normal animals (left) and after RAP (middle). The area occupied by postganglionic neurons (ratio of total cell area over ganglionic area) is shown on the right. For GP, = 22 and = 6 for normal, and = 27 and = 7 for RAP. For LSG, = 18 and = 3 in each group. () Relative GAP43 mRNA level by qPCR for normal atria and after RAP. = 7 for normal and 6 for RAP. () NGF mRNA level in the posterior left atrium (PLA), left atrial free wall (LAFW), and left atrial appendage (LAA) after RAP. = 8, 7, and 7, respectively. One-way ANOVA significance indicated in graph. *** < 0.001 for pairwise comparison with test.