Human cancer cells were eradicated by adoptive transfer of T cells transduced with a chimeric antigen receptor (CAR) made from an antibody (237Ab) that is highly specific for the murine Tn-glycosylated podoplanin (Tn-PDPN). The objectives were to determine the specificity of these CAR-transduced T (CART) cells and the mechanism for the absence of relapse. We show that although the 237Ab bound only to cell lines expressing murine Tn-PDPN, the 237Ab-derived 237CART cells lysed multiple different human and murine cancers not predicted by the 237Ab binding. Nevertheless, the 237CART cell reactivities remained cancer specific because all recognitions were dependent on the Tn glycosylation that resulted from COSMC mutations that were not present in normal tissues. While Tn was required for the recognition by 237CART, Tn alone was not sufficient for 237CART cell activation. Activation of 237CART cells required peptide backbone recognition but tolerated substitutions of up to 5 of the 7 amino acid residues in the motif recognized by 237Ab. Together, these findings demonstrate what we believe is a new principle whereby simultaneous recognition of multiple independent Tn-glycopeptide antigens on a cancer cell makes tumor escape due to antigen loss unlikely. 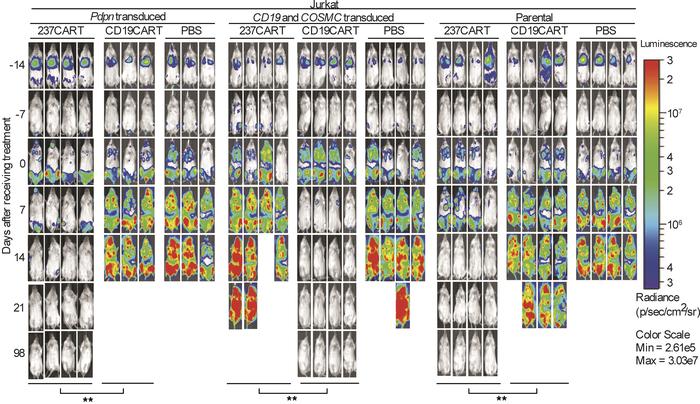 Survival of NSG mice bearing 2-week-old established systemic Jurkat leukemia (-, -, and -transduced, and the parental cell line) that were treated with 5 × 106 237CART cells, 5 × 106 CD19CART cells, or an equal volume of PBS ( = 3 or 4 mice per treatment group from at least 3 independent experiments as indicated in the figure). Disease progression was monitored weekly by bioluminescent imaging. The survival difference of the animals between the 2 groups was analyzed by log-rank Mantel-Cox test. ** ≤ 0.01.