A terminally differentiated cellular phenotype is thought to be maintained, at least in part, by both active and repressive histone marks. However, it is unclear whether regenerating cells after injury need to replicate such epigenetic marks to recover. To test whether renal epithelial cell regeneration is dependent on histone H3K4 methylation, we generated a mouse model that deleted the Paxip1 gene in mature renal proximal tubules. Paxip1 encodes PTIP, an essential protein in the Mll3/4 histone H3K4 methyltransferase complex. Mice with PTIP deletions in the adult kidney proximal tubules were viable and fertile. Upon acute kidney injury, such mice failed to regenerate damaged tubules, leading to scarring and interstitial fibrosis. The inability to repair damage was likely due to a failure to reenter mitosis and reactivate regulatory genes such as Sox9. PTIP deletion reduced histone H3K4 methylation in uninjured adult kidneys but did not significantly affect function or the expression of epithelial specific markers. Strikingly, cell lineage tracing revealed that surviving PTIP mutant cells could alter their phenotype and lose epithelial markers. These data demonstrate that PTIP and associated MLL3/4-mediated histone methylation are needed for regenerating proximal tubules and to maintain or reestablish the cellular epithelial phenotype. 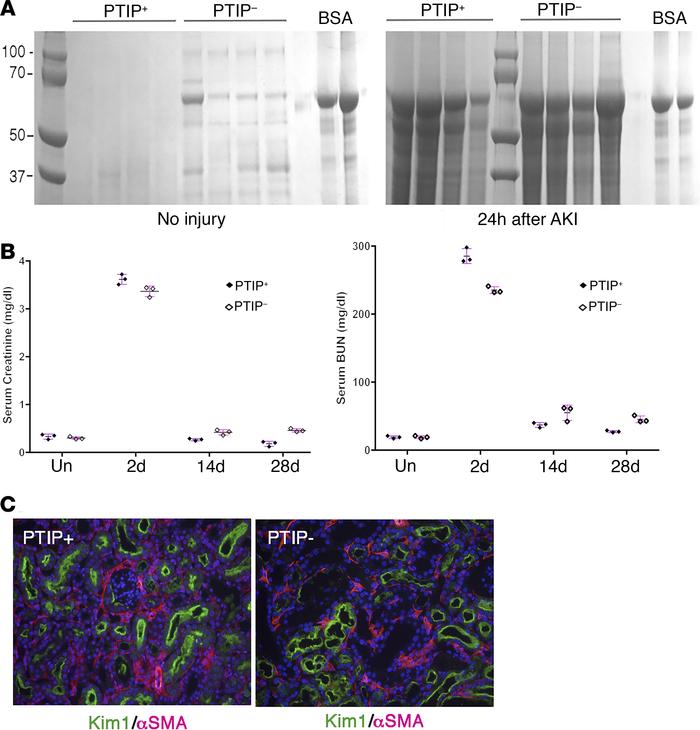 Mice were given a single dose of folic acid and analyzed for renal function. () Proteinuria is strongly induced 24 hours after AKI in both PTIP+ and PTIP– mice, whereas PTIP– mice have a slightly higher baseline of protein in urine prior to injury. () Serum creatinine and blood urea nitrogen (BUN) in mice before injury or at indicated days after AKI. Note highly elevated creatinine and BUN at 2 days after folic acid. Mice that recover show no significant differences in creatinine or BUN by 14 and 28 days after AKI. For each time point and genotype, 3 separate animals were tested. () Immunostaining for Kim1 (green) and αSMA (red) indicated significant injury in PTIP+ and PTIP– kidneys 2 days after folic acid injection.