We hypothesized that HIV-1 with dual-class but not single-class drug resistance mutations linked on the same viral genome, present in the virus population before initiation of antiretroviral therapy (ART), would be associated with failure of ART to suppress viremia. To test this hypothesis, we utilized an ultrasensitive single-genome sequencing assay that detects rare HIV-1 variants with linked drug resistance mutations (DRMs). A case (ART failure) control (nonfailure) study was designed to assess whether linkage of DRMs in pre-ART plasma samples was associated with treatment outcome in the nevirapine/tenofovir/emtricitabine arm of the AIDS Clinical Trials Group A5208/Optimal Combined Therapy After Nevirapine Exposure (OCTANE) Trial 1 among women who had received prior single-dose nevirapine. Ultrasensitive single-genome sequencing revealed a significant association between pre-ART HIV variants with DRMs to 2 drug classes linked on the same genome (dual class) and failure of combination ART with 3 drugs to suppress viremia. In contrast, linked, single-class DRMs were not associated with ART failure. We conclude that linked dual-class DRMs present before the initiation of ART are associated with ART failure, whereas linked single-class DRMs are not. 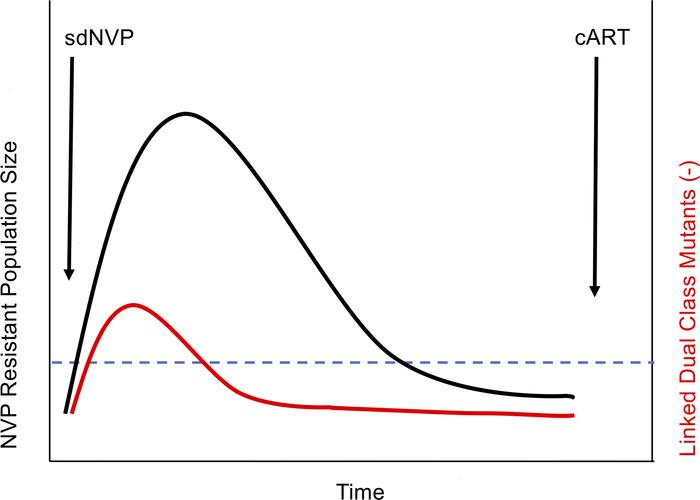 The large replicating population of resistant variants selected by sdNVP is depicted in black. Linkage of dual-class resistance mutations, occurring at that time either stochastically or through recombination, is shown in red. The blue dashed line is the limit of detection of standard single-genome sequencing. cART, combination ART.