Dysregulated citrullination, a unique form of posttranslational modification catalyzed by the peptidylarginine deiminases (PADs), has been observed in several human diseases, including rheumatoid arthritis. However, the physiological roles of PADs in the immune system are still poorly understood. Here, we report that global inhibition of citrullination enhances the differentiation of type 2 helper T (Th2) cells but attenuates the differentiation of Th17 cells, thereby increasing the susceptibility to allergic airway inflammation. This effect on Th cells is due to inhibition of PAD2 but not PAD4. Mechanistically, PAD2 directly citrullinates GATA3 and RORγt, 2 key transcription factors determining the fate of differentiating Th cells. Citrullination of R330 of GATA3 weakens its DNA binding ability, whereas citrullination of 4 arginine residues of RORγt strengthens its DNA binding. Finally, PAD2-deficient mice also display altered Th2/Th17 immune response and heightened sensitivity to allergic airway inflammation. Thus, our data highlight the potential and caveat of PAD2 as a therapeutic target of Th cell–mediated diseases.

PAD2-mediated citrullination regulates the DNA binding of GATA3 and RORγt. 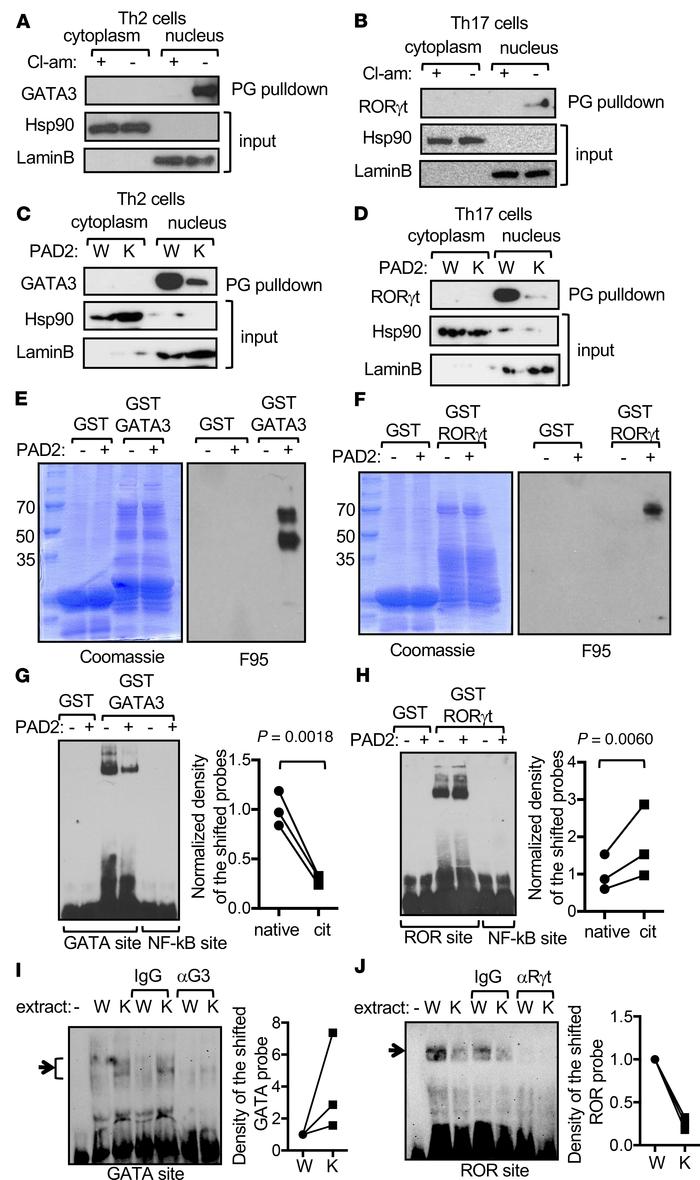 (–) Cytoplasmic and nuclear extract was prepared from WT DBA/1J ( and , W in and ) or PAD2-KO (K in and ) mouse Th2 or Th17 cells differentiated in the presence (+ in and ) or absence ( and , and – in and ) of Cl-am, incubated with PG-biotin, pulled down with streptavidin beads, and probed with anti-GATA3 ( and ) or anti-RORγt ( and ) in Western blotting (top panels). A fraction of the PG-biotin–labeled extract prior to pulldown was probed with anti-Hsp90 or anti–Lamin B to serve as input controls (middle and bottom panels). Data shown is from 1 experiment. ( and ) Recombinant GST, GST-GATA3 (), and GST-RORγt () were incubated with (+) or without () PAD2, fractionated in SDS-PAGE gels, stained with Coomassie blue (left panels), and probed with F95 (right panels) in Western blotting. Data shown are representative blots from at least 2 experiments. ( and ) The recombinant proteins from and were incubated with indicated DNA probes in EMSA. Representative EMSA gels from 3 experiments are shown. The normalized density of the shifted probes (1 = the averaged density obtained with native proteins) is shown in the dot graphs (2-tailed paired Student’s test). Data from the same experiment are connected with lines. ( and ) EMSA was performed by incubating nuclear extract from WT (W) or PAD2-KO (K) Th2 () or Th17 () cells with GATA and ROR probes, respectively, in the absence or presence of IgG, anti-GATA3 (αG3) or anti-RORγt (αRγt). Representative EMSA gels from 3 experiments are shown, and the shifted probes are marked with arrows. The relative density of the shifted probes is shown in the dot graphs. The density from the probes shifted by the WT extract in the absence of IgG was arbitrarily set as 1.