Apelin is a well-established mediator of survival and mitogenic signaling through the apelin receptor (Aplnr) and has been implicated in various cancers; however, little is known regarding Elabela (ELA/APELA) signaling, also mediated by Aplnr, and its role and the role of the conversion of its precursor proELA into mature ELA in cancer are unknown. Here, we identified a function of mTORC1 signaling as an essential mediator of ELA that repressed kidney tumor cell growth, migration, and survival. Moreover, sunitinib and ELA showed a synergistic effect in repressing tumor growth and angiogenesis in mice. The use of site-directed mutagenesis and pharmacological experiments provided evidence that the alteration of the cleavage site of proELA by furin induced improved ELA antitumorigenic activity. Finally, a cohort of tumors and public data sets revealed that ELA was only repressed in the main human kidney cancer subtypes, namely clear cell, papillary, and chromophobe renal cell carcinoma. Aplnr was expressed by various kidney cells, whereas ELA was generally expressed by epithelial cells. Collectively, these results showed the tumor-suppressive role of mTORC1 signaling mediated by ELA and established the potential use of ELA or derivatives in kidney cancer treatment. 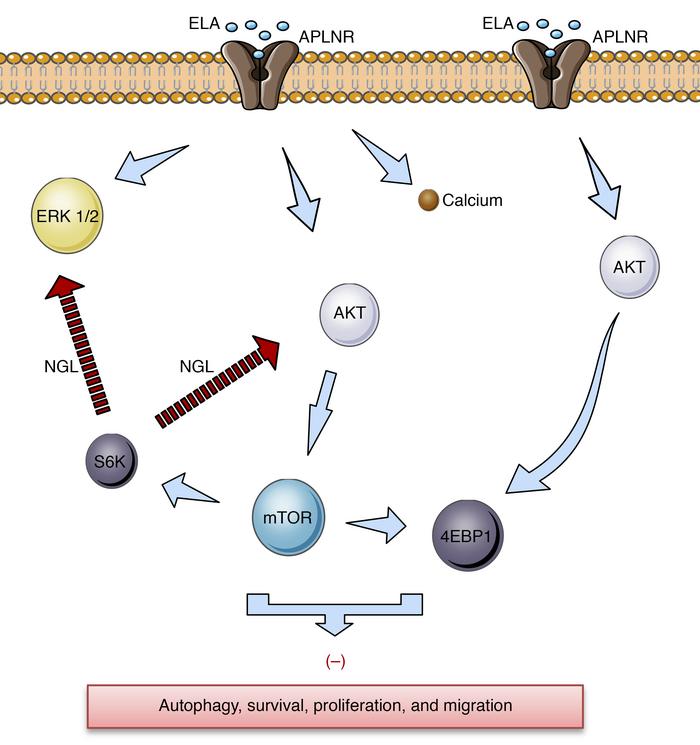