In HIV-infected individuals on long-term antiretroviral therapy (ART), more than 40% of the infected cells are in clones. Although most HIV proviruses present in individuals on long-term ART are defective, including those in clonally expanded cells, there is increasing evidence that clones carrying replication-competent proviruses are common in patients on long-term ART and form part of the HIV reservoir that makes it impossible to cure HIV infection with current ART alone. Given the importance of clonal expansion in HIV persistence, we determined how soon after HIV acquisition infected clones can grow large enough to be detected (clones larger than ca. 1 × 105 cells). We studied 12 individuals sampled in early HIV infection (Fiebig stage III–V/VI) and 5 who were chronically infected. The recently infected individuals were started on ART at or near the time of diagnosis. We isolated more than 6,500 independent integration sites from peripheral blood mononuclear cells before ART was initiated and after 0.5–18 years of suppressive ART. Some infected clones could be detected approximately 4 weeks after HIV infection and some of these clones persisted for years. The results help to explain how the reservoir is established early and persists for years.

Summary of the results for all of the donors in –. 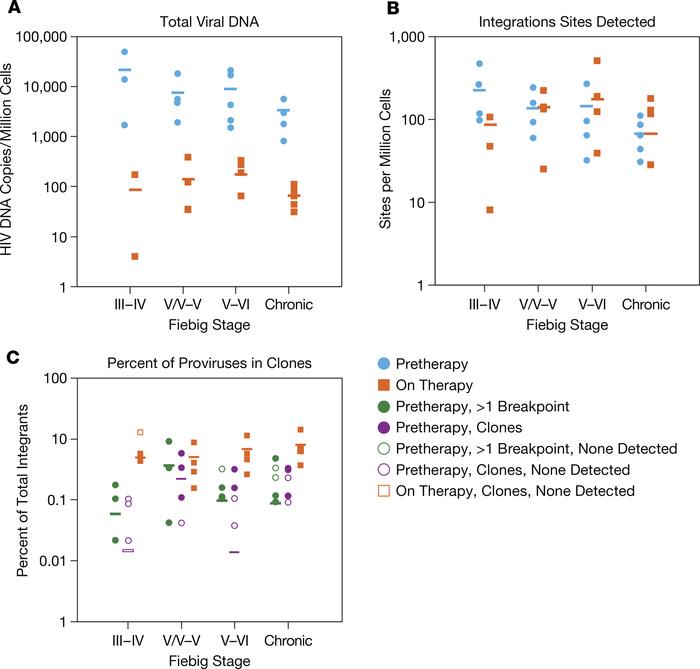 ( and ) The plots show the individual pre-ART (blue circles) and on-ART (orange squares) data, which were obtained from donors who were diagnosed and put on ART in Fiebig stage III–IV (group 1a), Fiebig stage IV/V–V (group 1b), Fiebig stages V/VI–VI (group 2), or were chronically infected at the time treatment was initiated. () Total HIV DNA per million PBMCs. () Integration sites recovered per million PBMCs. () Frequency of all integration sites with more than 1 breakpoint (green circles) or in confirmed clones (purple circles). Orange squares in indicate frequency of clones in the on-ART PBMC samples from the same donors. Open symbols denote samples with no integrations in clones or with more than 1 breakpoint, plotted at the limit of detection (1/number of sites in all samples). Horizontal bars show the ratio for each group as a whole. The open purple bar in the Fiebig III–IV group, which had no confirmed clones, indicates the limit of detection of clones for the group as a whole.