Identification of epitopes in ovalbumin that provide insights for cancer neoepitopes

Identification of epitopes in ovalbumin that provide insights for cancer neoepitopes

MHC I–restricted epitopes of chicken ovalbumin (OVA) were originally identified using CD8+ T cells as probes. Here, using bioinformatics tools, we identify 4 additional epitopes in OVA in addition to a cryptic epitope. Each additional epitope is presented in vivo, as deduced from the lack of CD8+ T cell response to it in OVA-transgenic mice. In addition, CD8 responses to the previously known epitopes and those identified in this study are examined in C57BL/6J mice exposed to the OVA-expressing tumor E.G7 in several ways. No responses to any epitope, including SIINFEKL, are detected in mice with growing E.G7 or mice immunized with the tumor. Only in E.G7-bearing mice treated with an anti–CTLA-4 antibody, which depletes tumor-infiltrating regulatory T cells, are CD8 responses to SIINFEKL and the epitope EKYNLTSVL identified in this study detected. Finally, all epitopes fail to treat mice with preexisting tumors. These observations force an important reconsideration of the common assumptions about the therapeutic value of neoepitopes detected by CD8 responses in tumor-bearing hosts.

Antigenicity of putative and known epitypic peptides of OVA. 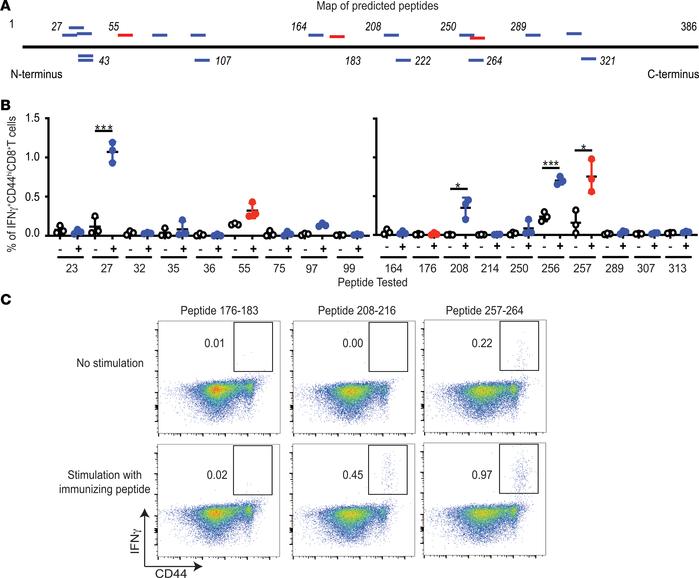 () Positions of putative (blue) and the previously reported (red) epitopes of OVA, as detailed in . Horizontal black line represents the primary structure of OVA. Italicized numbers above and below OVA mark various amino acid positions. () Immunogenicity of each putative epitypic (blue) and the previously known (red) peptides of OVA shown in . “–” Indicates no stimulation and “+” indicates stimulation of LN cells in vitro with the immunizing peptide for 12 hours. Tested peptides are identified on the axis with the position of their N-terminal residue ( = 3; each peptide tested in 9 different mice over 4 independent experiments; Welch’s test). () Representative assay of the ability of SIINFEKL (257–264), peptide 176–183 (also previously known), and 208–216 (potentially novel peptide) to elicit CD8+ T cell responses upon immunization of C57BL/6J mice, as described in Methods (each peptide tested in 9 different mice in several independent experiments). Flow cytometry plots of viable CD3+CD8+ cells from LNs of immunized mice are shown. * ≤ 0.05, *** ≤ 0.001.