BACKGROUND Clinical diagnosis of acute interstitial nephritis (AIN) is challenging because of lack of a diagnostic biomarker and requires a kidney biopsy. We hypothesized that AIN is mediated by specific T cell subsets such that specific T cell cytokine levels could serve as biomarkers to distinguish AIN from other causes of acute kidney disease (AKD).METHODS We enrolled consecutive sampling participants who underwent a kidney biopsy for AKD evaluation at 2 centers between 2015 and 2018. Three pathologists independently established AIN diagnosis through review of kidney biopsies. Through univariable and multivariable analysis of 12 selected urine and plasma cytokines, we identified 2 that were diagnostic of AIN.RESULTS Of the 218 participants, 32 (15%) were diagnosed with AIN by all 3 pathologists. Participants with AIN had consistently higher levels of urine TNF-α and IL-9 than those with other diagnoses, including acute tubular injury, glomerular diseases, and diabetic kidney disease, and those without any kidney disease. As compared with participants in the lowest quartile, we noted higher odds of AIN in participants in the highest quartiles of TNF-α levels (adjusted odds ratio, 10.9 [1.8, 65.9]) and IL-9 levels (7.5 [1.2, 45.7]) when controlling for blood eosinophils, leukocyturia, and proteinuria. Addition of biomarkers improved area under receiver operating characteristic curve over clinicians’ prebiopsy diagnosis (0.84 [0.78, 0.91]) vs. 0.62 [(0.53, 0.71]) and a model of current tests (0.84 [0.76, 0.91] vs. 0.69 [0.58, 0.80]).CONCLUSIONS Inclusion of urinary TNF-α and IL-9 improves discrimination over clinicians’ prebiopsy diagnosis and currently available tests for AIN diagnosis.FUNDING Supported by NIH awards K23DK117065, T32DK007276, K24DK090203, K23DK097201, R01DK113191, UG3-DK114866, P30DK079310; the Robert E. Leet and Clara Guthrie Patterson Trust; and American Heart Association award 18CDA34060118. 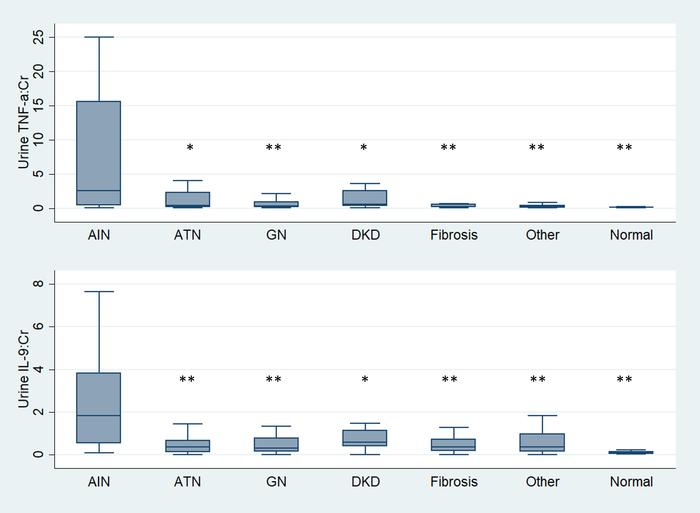