Tregs are key modulators of inflammation and are important for the maintenance of peripheral tolerance. Adoptive immunotherapy with polyclonal Tregs holds promise in organ transplantation, graft-versus-host disease, and autoimmune diseases but may be enhanced by antigen-specific, long-lived Tregs. We modified primary human Tregs with chimeric antigen receptors (CARs) bearing different costimulatory domains and performed in vitro analyses of their phenotype and function. While neither the presence of a CAR nor the type of costimulation domain influenced Foxp3 expression in Tregs, the costimulation domain of the CARs affected CAR-Treg surface phenotype and functions, such as cytokine production. Furthermore, signaling from the CD28 costimulation domain maintained CAR-Treg suppressor function, whereas 4-1B costimulation did not. In vivo, CAR-Tregs accumulated at sites expressing target antigen and suppressed antigen-specific effector T cell responses; however, only CAR-Tregs with CD28 signaling domains were potent inhibitors of effector T cell–mediated graft rejection in vivo. Our findings support the use of CD28-based CAR-Tregs for tissue-specific immune suppression in the clinic. 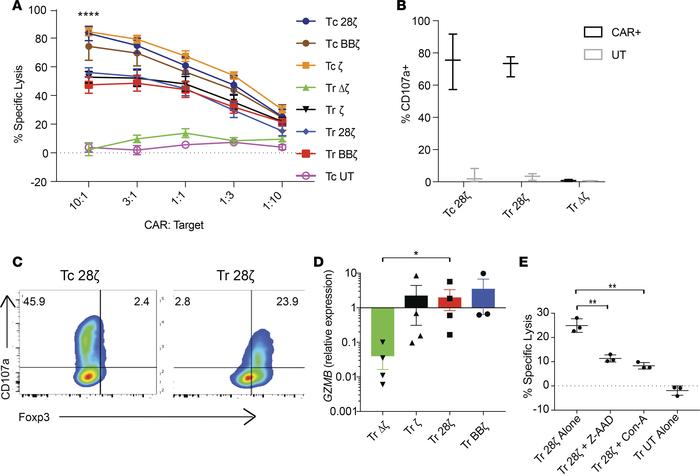