The loss of functional nephrons after kidney injury triggers the compensatory growth of the remaining ones to allow functional adaptation. However, in some cases, these compensatory events activate signaling pathways that lead to pathological alterations and chronic kidney disease. Little is known about the identity of these pathways and how they lead to the development of renal lesions. Here, we combined mouse strains that differently react to nephron reduction with molecular and temporal genome-wide transcriptome studies to elucidate the molecular mechanisms involved in these events. We demonstrated that nephron reduction led to 2 waves of cell proliferation: the first one occurred during the compensatory growth regardless of the genetic background, whereas the second one occurr﻿ed, after a quiescent phase, exclusively in the sensitive strain and accompanied the development of renal lesions. Similarly, clustering by coinertia analysis revealed the existence of 2 waves of gene expression. Interestingly, we identified type I interferon (IFN) response as an early (first-wave) and specific signature of the sensitive (FVB/N) mice. Activation of type I IFN response was associated with G1/S cell cycle arrest, which correlated with p21 nuclear translocation. Remarkably, the transient induction of type I IFN response by poly(I:C) injections during the compensatory growth resulted in renal lesions in otherwise-resistant C57BL6 mice. Collectively, these results suggest that the early molecular and cellular events occurring after nephron reduction determine the risk of developing late renal lesions and point to type I IFN response as a crucial event of the deterioration process. 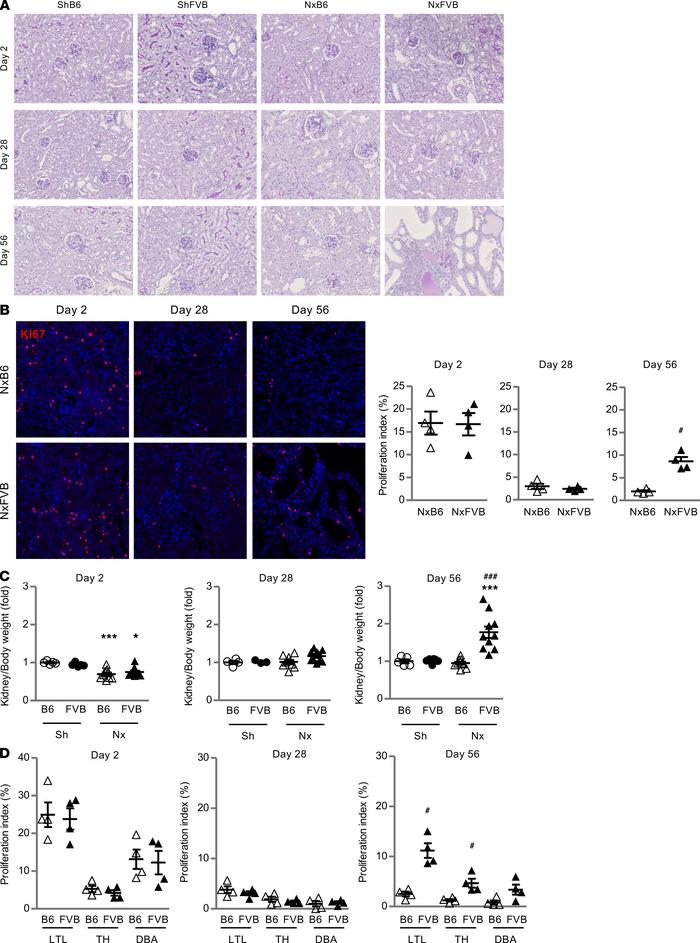