Protective role of B cells in sterile particulate–induced lung injury

Protective role of B cells in sterile particulate–induced lung injury

Susceptibility to chronic beryllium (Be) disease (CBD) is linked to HLA-DP molecules possessing a glutamic acid at the 69th position of the β-chain (βGlu69), with the most prevalent βGlu69-containing molecule being HLA-DP2. We have previously shown that HLA-DP2–transgenic (HLA-DP2–Tg) mice exposed to Be oxide (BeO) develop mononuclear infiltrates in a peribronchovascular distribution and a beryllium-specific, HLA-DP2–restricted CD4+ T cell response. In addition to T cells, B cells constituted a major portion of infiltrated leukocytes in the lung of BeO-exposed HLA-DP2–Tg mice and sequester BeO particles within ectopic lymphoid aggregates and granulomas. B cell depletion was associated with a loss of lymphoid aggregates and granulomas as well as a significant increase in lung injury in BeO-exposed mice. The protective role of B cells was innate in origin, and BeO-induced B cell recruitment to the lung was dependent on MyD88 signaling. Similar to BeO-exposed HLA-DP2–Tg mice, B cells also accumulate in the lungs of CBD subjects, located at the periphery and surrounding the granuloma. Overall, our data suggest what we believe is a novel modulatory role for B cells in the protection of the lung against sterile particulate exposure, with B cell recruitment to the inflamed lung occurring in an antigen-independent and MyD88-dependent manner.

B cell accumulation and activation in the lungs after BeO exposure in FVB/N HLA-DP2–Tg mice. 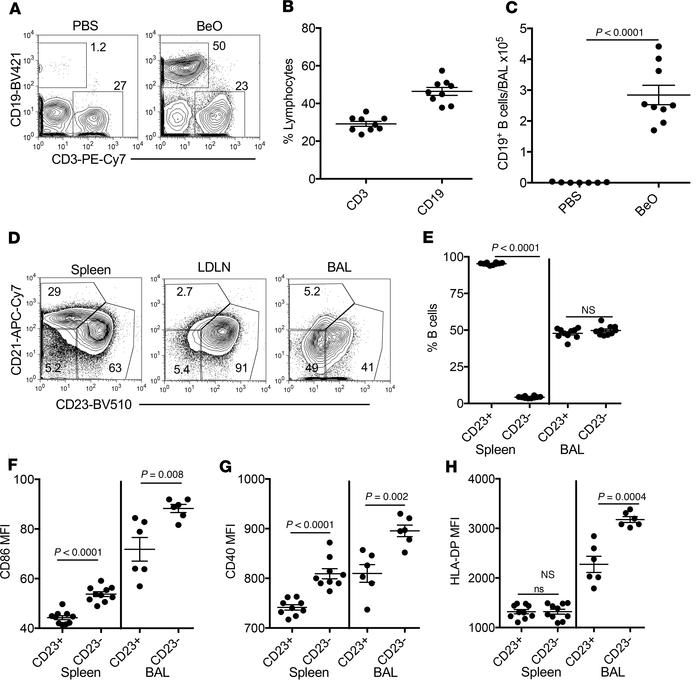 HLA-DP2–Tg FVB/N mice were exposed to PBS or BeO as described in Methods, and BAL was harvested on day 21 and analyzed by flow cytometry. () Representative density plots show the percentage of CD19+ B cells and CD3+ T cells in the BAL of PBS- (left) and BeO-exposed (right) mice. The numbers in each density plot indicate the percentage of cells in each population. () Percentage of lymphocytes that are CD3+ T cells and CD19+ B cells in the BAL are cumulatively shown for PBS- and BeO-exposed mice. () Number of CD19+ B cells in the BAL of HLA-DP2–Tg mice exposed to either PBS or BeO is shown. () B220+CD19+ B cells in spleen were stained for CD21 and CD23 expression to establish gates for marginal zone B cells (CD21+CD23–) and follicular B cells (CD23+CD21–) in BAL and lung-draining lymph nodes (LDLNs). The numbers in each gate indicate the percentage of cells in each B cell subset. () Percentage of CD23+ and CD23– B cells in the spleen and BAL of HLA-DP2–Tg mice after BeO exposure is shown. The expression (mean fluorescence intensity [MFI]) of costimulatory molecules CD86 () and CD40 (), and HLA-DP () on CD19+CD23+ and CD19+CD23– B cells derived from spleen ( = 10 mice/group) and BAL ( = 6 mice/group) of HLA-DP2–Tg mice after BeO exposure is shown. Data are representative of 3 independent experiments having 5 to 10 mice per group. Solid lines and error bars depict the mean ± SEM. Student’s test (2 tailed) ( and ) and 2-way ANOVA were used to test for differences. A value of <0.05 was considered statistically significant.