Sarcomeric disarray is a hallmark of gene mutations in patients with hypertrophic cardiomyopathy (HCM). However, it is unknown when detrimental sarcomeric changes first occur and whether they originate in the developing embryonic heart. Furthermore, Rho kinase (ROCK) is a serine/threonine protein kinase that is critical for regulating the function of several sarcomeric proteins, and therefore, our aim was to determine whether disruption of ROCK signaling during the earliest stages of heart development would disrupt the integrity of sarcomeres, altering heart development and function. Using a mouse model in which the function of ROCK is specifically disrupted in embryonic cardiomyocytes, we demonstrate a progressive cardiomyopathy that first appeared as sarcomeric disarray during cardiogenesis. This led to abnormalities in the structure of the embryonic ventricular wall and compensatory cardiomyocyte hypertrophy during fetal development. This sarcomeric disruption and hypertrophy persisted throughout adult life, triggering left ventricular concentric hypertrophy with systolic dysfunction, and reactivation of fetal gene expression and cardiac fibrosis, all typical features of HCM. Taken together, our findings establish a mechanism for the developmental origin of the sarcomeric phenotype of HCM and suggest that variants in the ROCK genes or disruption of ROCK signaling could, in part, contribute to its pathogenesis.

Downregulation of ROCK1 and ROCK2 in embryonic cardiomyocytes leads to defects in the ventricular wall during embryogenesis. 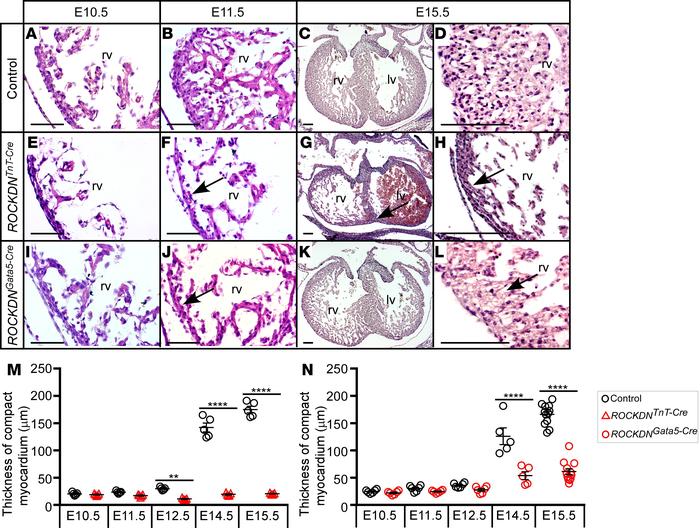