Atherosclerosis is a leading cause of death worldwide in industrialized countries. Disease progression and regression are associated with different activation states of macrophages derived from inflammatory monocytes entering the plaques. The features of monocyte-to-macrophage transition and the full spectrum of macrophage activation states during either plaque progression or regression, however, are incompletely established. Here, we use a combination of single-cell RNA sequencing and genetic fate mapping to profile, for the first time to our knowledge, plaque cells derived from CX3CR1+ precursors in mice during both progression and regression of atherosclerosis. The analyses revealed a spectrum of macrophage activation states with greater complexity than the traditional M1 and M2 polarization states, with progression associated with differentiation of CXC3R1+ monocytes into more distinct states than during regression. We also identified an unexpected cluster of proliferating monocytes with a stem cell–like signature, suggesting that monocytes may persist in a proliferating self-renewal state in inflamed tissue, rather than differentiating immediately into macrophages after entering the tissue.

Fate mapping the conversion of CX3CR1+ cells into plaque macrophages. 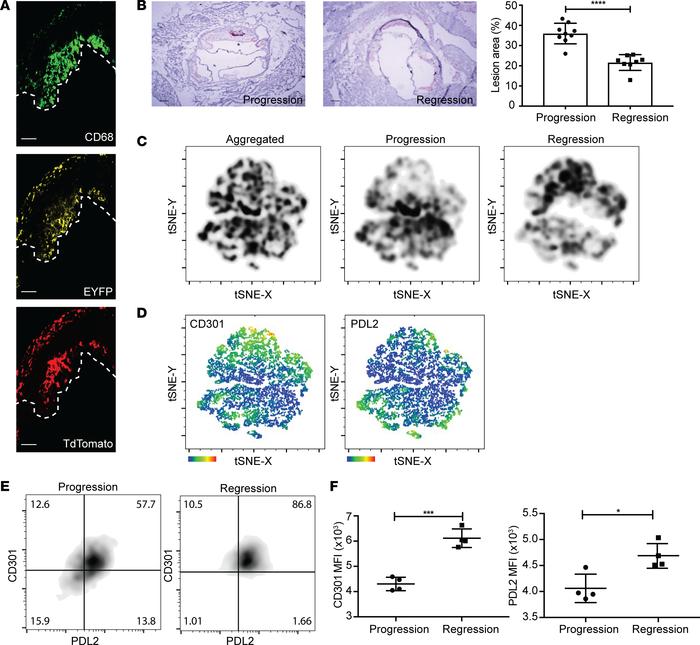 () Representative confocal images of aortic roots stained with CD68 (green), EYFP (yellow), and TdTomato (red) in BM chimeras of mice reconstituted with BM from mice ( = 3) gavaged with tamoxifen (TAM) at 14 and 15 weeks after feeding on a Western diet (WD) to label cells derived from CX3CR1+ monocytes. Scale bars: 50 μm. (–) Analysis of aortic arches by flow cytometry of mice injected with AAV-PCSK9 and fed WD for 18 weeks before TAM treatment. Progression group mice ( = 4) were then kept on WD, while regression group mice were switched to chow and treated with ApoB-ASO for 2 weeks ( = 4). () Representative bright-field images and quantification of lesion areas of aortic roots. Scale bars: 50 um. () Density plot of -distributed stochastic neighbor embedding (-SNE) analysis of CD11b+TdTomato+ cells from aortic arches of mice in progression and regression groups subjected to aortic digestion. The aortic arches were analyzed by flow cytometry for expression of PD-L2, CD301, EYFP, F4/80, and MHCII markers ( = 8). () Heatmaps of geometric mean fluorescence, () quadrant plots, and () geometric MFI of PD-L2 and CD301 expression on CD11b+TdTomato+ cells from progression and regression groups in atherosclerotic mice with AAV-mPCSK9 induction. Progression, = 4–9; regression, = 4–8. Statistical significance was calculated using Student’s test, and data are presented as mean ± SEM ( and ). * < 0.05, *** < 0.001, **** < 0.0001.