Macrophage activation, i.e., classical M1 and the alternative M2, plays a critical role in many pathophysiological processes, such as inflammation and tissue injury and repair. Although the regulation of macrophage activation has been under extensive investigation, there is little knowledge about the role of long noncoding RNAs (lncRNAs) in this event. In this study, we found that lncRNA Malat1 expression is distinctly regulated in differentially activated macrophages in that it is upregulated in LPS-treated and downregulated in IL-4–treated cells. Malat1 knockdown attenuates LPS-induced M1 macrophage activation. In contrast, Malat1 knockdown enhanced IL-4–activated M2 differentiation as well as a macrophage profibrotic phenotype. Mechanistically, Malat1 knockdown led to decreased expression of Clec16a, silencing of which phenocopied the regulatory effect of Malat1 on M1 activation. Interestingly, Malat1 knockdown promoted IL-4 induction of mitochondrial pyruvate carriers (MPCs) and their mediation of glucose-derived oxidative phosphorylation (OxPhos), which was crucial to the Malat1 regulation of M2 differentiation and profibrotic phenotype. Furthermore, mice with either global or conditional myeloid knockout of Malat1 demonstrated diminished LPS-induced systemic and pulmonary inflammation and injury. In contrast, these mice developed more severe bleomycin-induced lung fibrosis, accompanied by alveolar macrophages displaying augmented M2 and profibrotic phenotypes. In summary, we have identified what we believe is a previously unrecognized role of Malat1 in the regulation of macrophage polarization. Our data demonstrate that Malat1 is involved in pulmonary pathogeneses in association with aberrant macrophage activation. 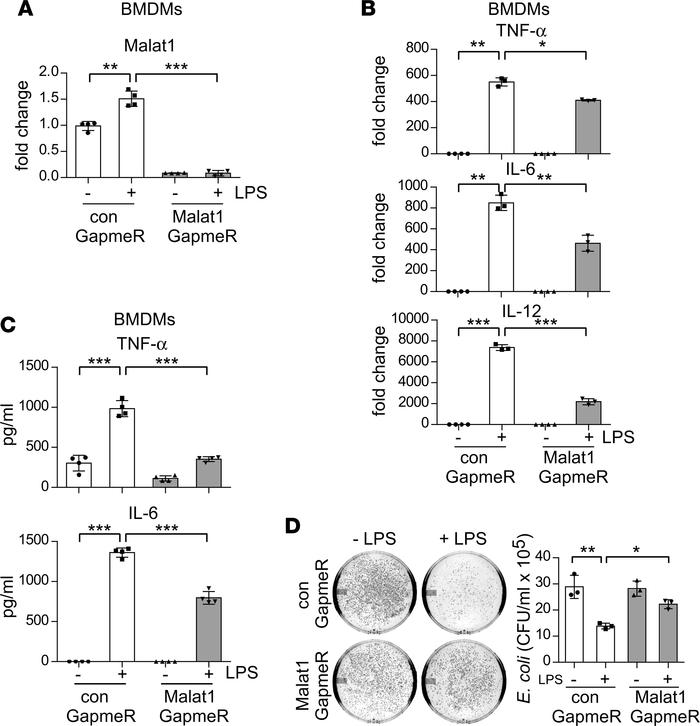 () BMDMs were transfected with 20 nM control (con) GapmeR or Malat1 GapmeR. Forty-eight hours after transfection, the cells were treated with or without 100 ng/ml LPS for 6 hours. Total RNAs were isolated and levels of Malat1 determined by real-time PCR. = 4; mean ± SD. ( and ) Experiments were performed as in . mRNA () and protein () levels of the indicated proinflammatory cytokines were determined by real-time PCR or ELISA. = 3–4; mean ± SD. () Experiments were performed as in . Bacterial killing assay was performed as described in Methods. = 3; mean ± SD. * < 0.05; ** < 0.01; *** < 0.001 by 1-way ANOVA with Bonferroni’s post hoc test (–). Representative of more than 3 independent experiments.