Th1 Tregs are characterized by the acquisition of proinflammatory cytokine secretion and reduced suppressor activity. Th1 Tregs are found at increased frequency in autoimmune diseases, including type 1 diabetes and multiple sclerosis (MS). We have previously reported that in vitro stimulation with IL-12 recapitulates the functional and molecular features of MS-associated Th1 Tregs, revealing a central role for hyperactivation of the Akt pathway in their induction. TIGIT is a newly identified coinhibitory receptor that marks Tregs that specifically control Th1 and Th17 responses. Here, we report that signaling through TIGIT counteracts the action of IL-12 in inducing the Th1 program. Specifically, TIGIT signaling represses production of IFN-γ and T-bet expression and restores suppressor function in Tregs treated with IL-12. FoxO1 functional inhibition abolishes the protective effect of TIGIT, indicating that TIGIT signaling promotes FoxO1 nuclear localization. Consistent with this observation, signaling through TIGIT leads to a rapid suppression of Akt function and FoxO1 phosphorylation. Finally, TIGIT stimulation reduces the production of IFN-γ and corrects the suppressor defect of Tregs from patients with MS. Our results indicate an important role for TIGIT in controlling the functional stability of Tregs through repression of Akt, suggesting that the TIGIT pathway could be targeted for immunomodulatory therapies in human autoimmune disorders. 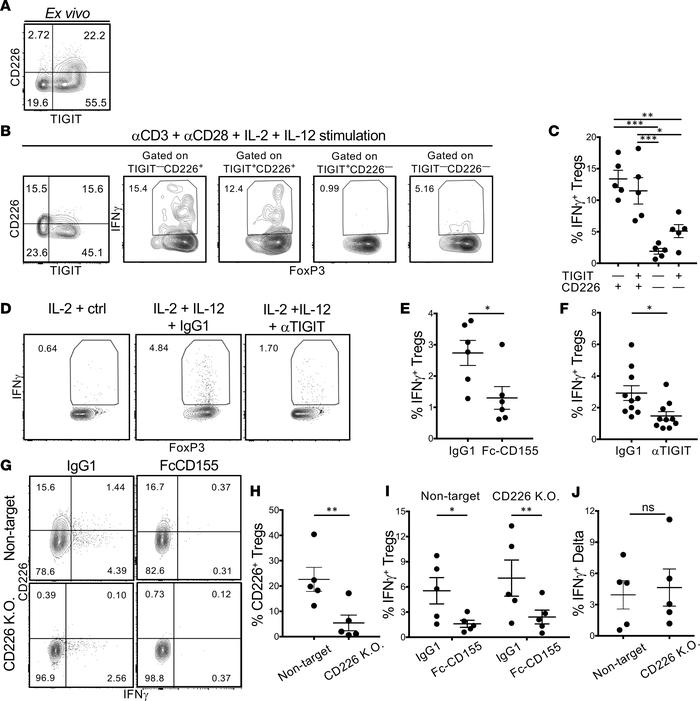