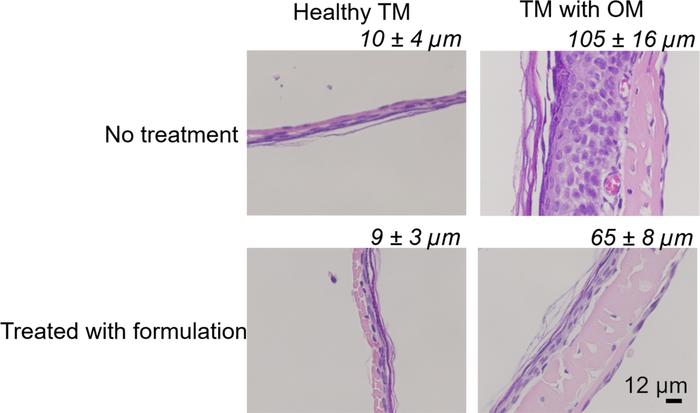 The H&E-stained sections were obtained from healthy TMs and of TMs after 7 days of otitis media (OM), without or after treatment with the formulation containing 4% (w/v) ciprofloxacin, 2% (w/v) limonene, 1% (w/v) sodium dodecyl sulfate, 0.5% (w/v) bupivacaine hydrochloride, and 12% (w/v) poloxamer 407-polybutylphosphoester (4%Cip-3CPE-[P407-PBP]). = 11 for healthy TM with no treatment; = 4 for TM with OM with no treatment; = 4 for healthy TM with treatment; = 11 for TM with OM with treatment. Scale bar: 12 μm. The average thickness of TMs ( ± SD) for each group is shown above their respective panels.