It has been reported that 2.5%–30% of human peripheral CD27– B cells are autoreactive and anergic based on unresponsiveness to antigen receptor (BCR) stimulation and autoreactivity of cloned and expressed BCR. The molecular mechanisms that maintain this unresponsiveness are unknown. Here, we showed that in humans anergy is maintained by elevated expression of PTEN, a phosphatidylinositol 3,4,5P-3-phosphatase. Upregulation of PTEN was associated with reduced expression of microRNAs that control its expression. Pharmacologic inhibition of PTEN lead to significant restoration of responsiveness. Consistent with a role in conferring risk of autoimmunity, B cells from type 1 diabetics and autoimmune thyroid disease patients expressed reduced PTEN. Unexpectedly, in healthy individuals PTEN expression was elevated in on average 40% of CD27– B cells, with levels gradually decreasing as IgM levels increase. Our findings suggest that a much higher proportion of the peripheral repertoire is autoreactive than previously thought and that B cells upregulate PTEN in a manner that is proportional to the recognition of autoantigens of increasing avidity, thus tuning BCR signaling to prevent development of autoimmunity while providing a reservoir of cells that can be readily activated to respond when needed.

Anergic BND cells (representing 2.5% of B cells) are hyporesponsive and have elevated expression of PTEN. 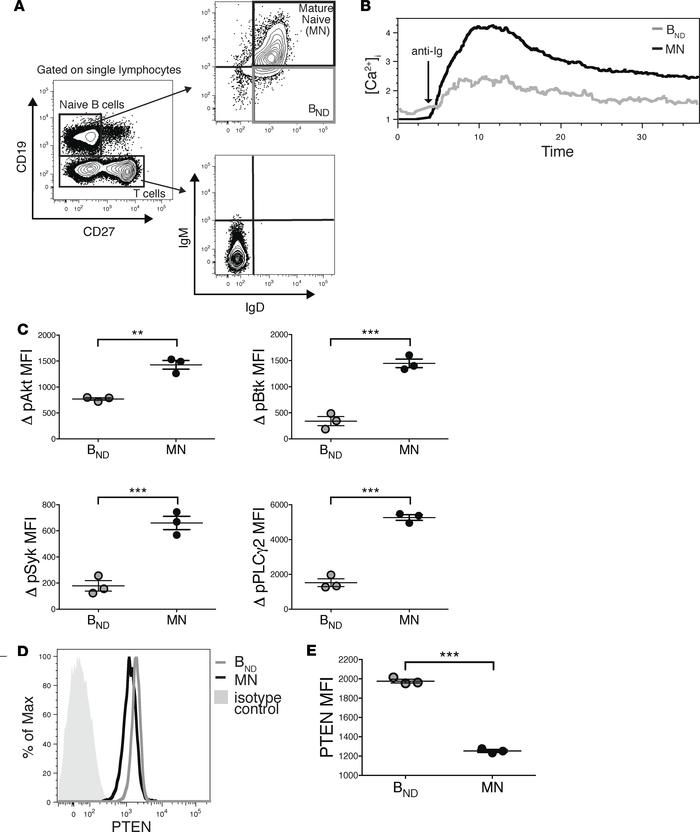