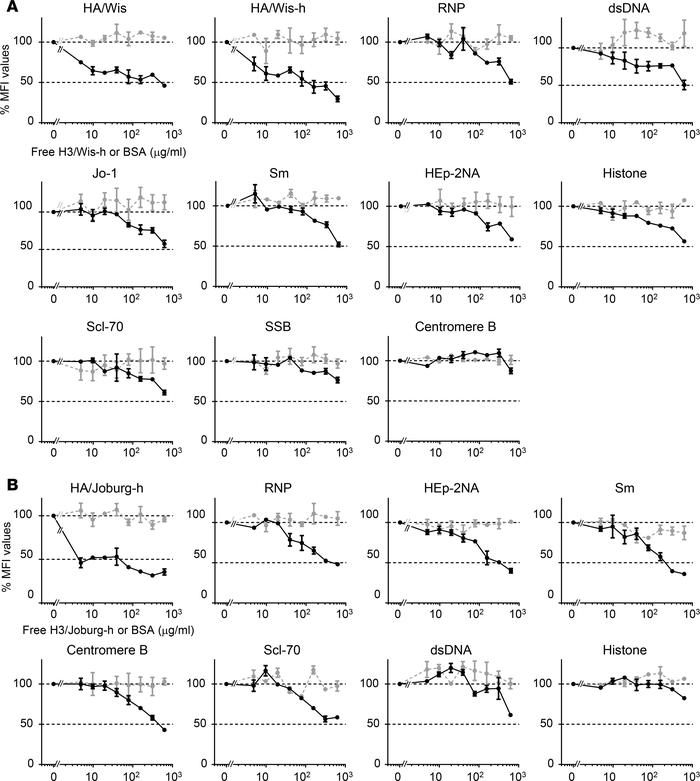 Selected F+S-reactive IgGs were incubated with various concentrations of free, either specific or irrelevant (BSA) foreign antigens, and then binding to foreign antigens (homologous inhibition) and self-antigens (heterologous inhibition) was assessed by Luminex multiplex assay. Fixed concentrations of F+S-reactive IgGs (100 μg/ml for Ab5 in , 500 μg/ml for Ab6 in ) were first incubated with the indicated concentrations of free HA/Wis-h (, black lines) or HA/Joburg-h (, black lines) or BSA ( and , gray lines), and then these mixtures were added to a panel of antigen-bead conjugates. MFI values for each antigen-bead conjugate were normalized with those without free antigens that were set as 100%. Ab5 bound HA/Wis and HA/Wis-h, and human self-antigens, including RNP, dsDNA, Jo-1, Sm, HEp-2 NA, histone, Scl-70, SSB, and centromere B (). Ab6 bound HA/Joburg-h and self-antigens, including RNP, HEp-2NA, Sm, centromere B, Scl-70, dsDNA, and histone ().