Belimumab has therapeutic benefit in active systemic lupus erythematosus (SLE), especially in patients with high-titer anti-dsDNA antibodies. We asked whether the profound B cell loss in belimumab-treated SLE patients is accompanied by shifts in the immunoglobulin repertoire. We enrolled 15 patients who had been continuously treated with belimumab for more than 7 years, 17 matched controls, and 5 patients who were studied before and after drug initiation. VH genes of sort-purified mature B cells and plasmablasts were subjected to next-generation sequencing. We found that B cell–activating factor (BAFF) regulates the transitional B cell checkpoint, with conservation of transitional 1 (T1) cells and approximately 90% loss of T3 and naive B cells after chronic belimumab treatment. Class-switched memory B cells, B1 B cells, and plasmablasts were also substantially depleted. Next-generation sequencing revealed no redistribution of VH, DH, or JH family usage and no effect of belimumab on representation of the autoreactive VH4-34 gene or CDR3 composition in unmutated IgM sequences, suggesting a minimal effect on selection of the naive B cell repertoire. Interestingly, a significantly greater loss of VH4-34 was observed among mutated IgM and plasmablast sequences in chronic belimumab–treated subjects than in controls, suggesting that belimumab promotes negative selection of activated autoreactive B cells.

Most B cell subsets are depleted after chronic belimumab therapy. 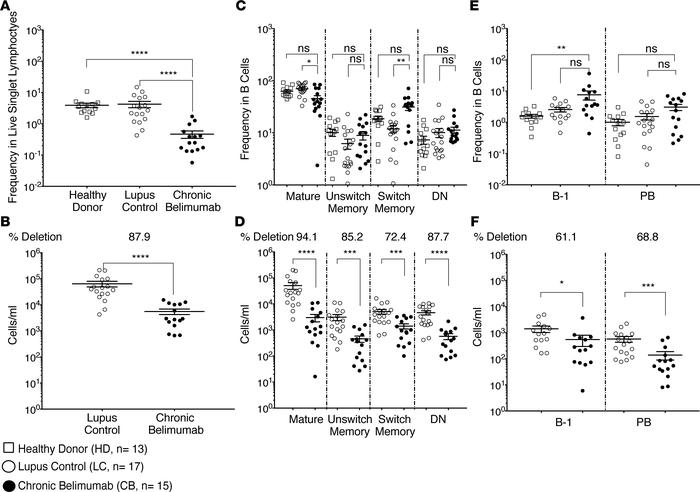