MEG3-binding sites in the promoters of genes associated with basal cell differentiation. 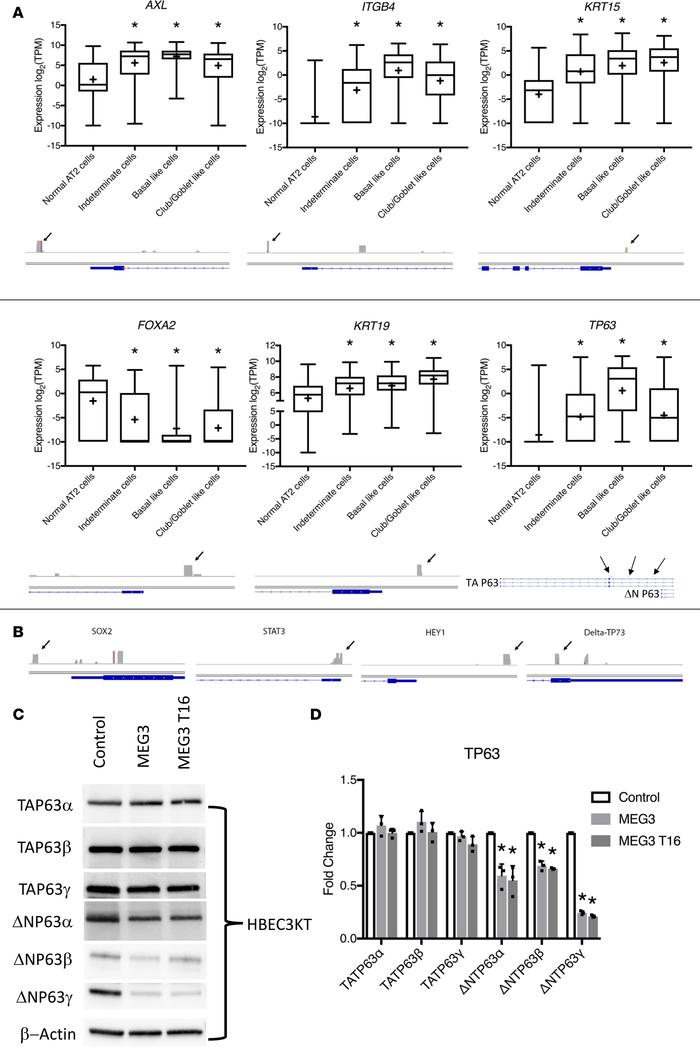 ChOP-sequencing data of -binding sites in BT-549 cells () were analyzed using Homer’s and visualized using integrated genomics viewer to reveal binding sites in gene promoters and compared with differentially expressed genes identified by analyzing single-cell RNA sequencing of IPF and control lungs, as described in the Methods. binding sites within promoters (arrows) were identified in genes (blue) associated with basal cells, including , , , , and , which are altered in IPF. binding sites were detected in the promoters of , , and and in the TA/ΔN splicing region of and , as shown as gray peaks with arrows in the gene maps. () Expression of basal cell–associated genes in IPF epithelial cell types from single-cell sequencing () and location of -binding sites curated from ChOP data (). Box-and-whisker plots represent the first and third quartile (box), median (line), mean (+), and minimum and maximum of the data (whiskers). TPM expression values are represented on a log2 scale. () Location of binding sites in the promoters of , , and and before the ΔN and start sites. Peaks were visualized using Integrative Genomics Viewer software. () Western blots of -transfected HBEC3KT cells were used to assess TP63 splice variants. () transfection inhibited levels of all ΔNTP63 isoforms and did not alter TAP63 isoforms in HBEC3KT cells. Differences in RNA expressions were determined by ANOVA followed by Holm-Bonferroni post hoc test. * < 0.01.