Brain-wide glymphatic enhancement and clearance in humans assessed with MRI

Brain-wide glymphatic enhancement and clearance in humans assessed with MRI

To what extent does the subarachnoid cerebrospinal fluid (CSF) compartment communicate directly with the extravascular compartment of human brain tissue? Interconnection between the subarachnoid CSF compartment and brain perivascular spaces is reported in some animal studies, but with controversy, and in vivo CSF tracer studies in humans are lacking. In the present work, we examined the distribution of a CSF tracer in the human brain by MRI over a prolonged time span. For this, we included a reference cohort, representing close to healthy individuals, and a cohort of patients with dementia and anticipated compromise of CSF circulation (idiopathic normal pressure hydrocephalus). The MRI contrast agent gadobutrol, which is confined to the extravascular brain compartment by the intact blood-brain barrier, was used as a CSF tracer. Standardized T1-weighted MRI scans were performed before and after intrathecal gadobutrol at defined time points, including at 24 hours, 48 hours, and 4 weeks. All MRI scans were aligned and brain regions were segmented using FreeSurfer, and changes in normalized T1 signals over time were quantified as percentage change from baseline. The study provides in vivo evidence of access to all human brain subregions of a substance administered intrathecally. Clearance of the tracer substance was delayed in the dementia cohort. These observations translate previous findings in animal studies into humans and open new prospects concerning intrathecal treatment regimens, extravascular contrast-enhanced MRI, and assessment of brain clearance function.

CSF tracer enrichment over time in one REF subject. 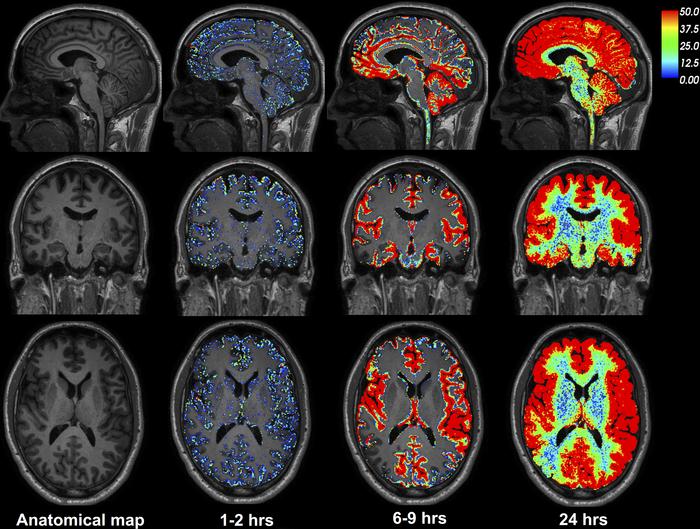 The brain-wide enrichment of CSF tracer over time is shown for one REF individual. The percentage change in signal unit ratio is indicated by the color scale. CSF tracer enrichment occurred in a centripetal pattern at a rate exceeding the expected for pure diffusion, suggesting an important role of bulk flow for transport of substances through the brain. Tracer enrichment occurred primarily, and was most pronounced, in brain regions adjacent to large artery trunks at the surface (6–9 hours), underlining the important role of CSF pulsations for entry of substances into brain tissue perivascular spaces. Note the coronal section (middle row) demonstrating enhancement in the medial temporal lobe adjacent to the circle of Willis and posterior cerebral arteries, in the cingulum adjacent to the location of the anterior cerebral arteries in the anterior interhemispheric fissure, and around the Sylvian fissure, where the middle cerebral artery trunks reside.