With more than 150,000 deaths per year in the US alone, lung cancer has the highest number of deaths for any cancer. These poor outcomes reflect a lack of treatment for the most common form of lung cancer, non–small cell lung carcinoma (NSCLC). Lung adenocarcinoma (ADC) is the most prevalent subtype of NSCLC, with the main oncogenic drivers being KRAS and epidermal growth factor receptor (EGFR). Whereas EGFR blockade has led to some success in lung ADC, effective KRAS inhibition is lacking. KRAS-mutant ADCs are characterized by high levels of gel-forming mucin expression, with the highest mucin levels corresponding to worse prognoses. Despite these well-recognized associations, little is known about roles for individual gel-forming mucins in ADC development causatively. We hypothesized that MUC5AC/Muc5ac, a mucin gene known to be commonly expressed in NSCLC, is crucial in KRAS/Kras-driven lung ADC. We found that MUC5AC was a significant determinant of poor prognosis, especially in patients with KRAS-mutant tumors. In addition, by using mice with lung ADC induced chemically with urethane or transgenically by mutant-Kras expression, we observed significantly reduced tumor development in animals lacking Muc5ac compared with controls. Collectively, these results provide strong support for MUC5AC as a potential therapeutic target for lung ADC, a disease with few effective treatments. 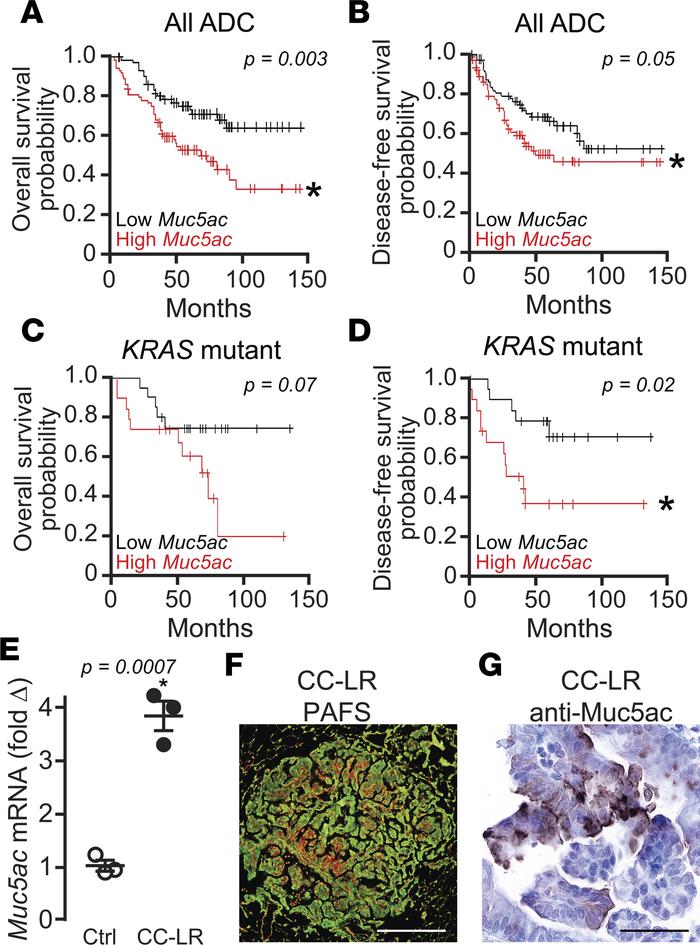