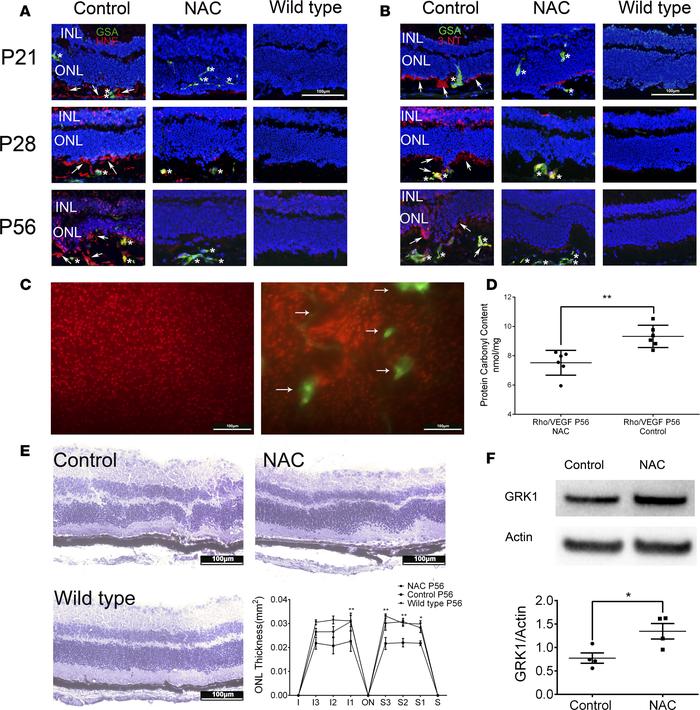 mice with type 3 choroidal NV were given normal drinking water or drinking water containing 7 mg/ml -acetylcysteine (NAC) and compared with wild-type mice. At postnatal day 21 (P21), P28, and P56, mice from each of these 3 groups were euthanized and frozen ocular sections were immunohistochemically stained for 4-hydroxynonenal (HNE, ) or 3-nitrotyrosine (3-NT, ) and vascular cells were stained with FITC-labeled agglutinin (GSA) lectin. Nuclei were stained with Hoechst. () At P21, untreated mice (control) showed HNE (red, arrows) along the outer border of the outer nuclear layer (ONL) and in the subretinal space adjacent to GSA-stained NV (green, asterisks), which was increased at P28 and P56 when there was also staining within the ONL and inner nuclear layer (INL). In NAC-treated mice there was minimal HNE at each of the time points but NV (green, asterisks) was seen within the ONL and subretinal space. At P28, some mild staining for HNE was seen adjacent to and within NV in the subretinal space. There was no HNE or NV seen in wild-type mice. () Control mice also showed 3-NT along the outer border of the ONL (red, arrows) adjacent to NV (green, asterisks) at all 3 time points with some staining in the INL at the later time points, whereas there was little 3-NT in NAC-treated mice, and none in wild-type mice. () Retinal flat mounts stained with peanut agglutinin (red) and GSA (green) showed evenly spaced cone matrix sheaths and no NV in P56 wild-type mice (left panel), whereas P56 mice (right panel) showed dropout of cone matrix sheaths adjacent to NV (arrows). () ELISA of retinal homogenates showed a significant reduction in mean (±SEM) protein carbonyl content in NAC-treated mice compared with control mice ( = 6 for each group). ** < 0.01 by unpaired test. () Hematoxylin-stained retinal sections from the same location in the retina (I3) show an ONL with irregular borders in untreated (control) and NAC-treated P56 mice (NAC), but the ONL appeared thicker in NAC-treated mice and more comparable to the ONL in P56 wild-type mice. Image analysis by an investigator masked with regard to treatment group showed that mean (±SEM) ONL thickness was significantly reduced in control versus NAC-treated mice at 4 of 6 measurement locations in the vertical meridian ( = 6 for each group). * < 0.05, ** < 0.01 by unpaired test. For context, mean (±SEM) ONL thickness at the same 6 locations is shown for P56 wild-type mice ( = 6). () A representative immunoblot for rhodopsin kinase (GRK1) shows a stronger signal in a retinal homogenate from a P56 NAC-treated mouse compared with an untreated P56 mouse (control). Densitometry showed that the mean (±SEM) GRK1/actin ratio was significantly greater in NAC-treated mice ( = 4). * < 0.05 by unpaired test.