IFN-inducible protein 16 (IFI16) is an innate immune sensor that forms filamentous oligomers when activated by double-stranded DNA (dsDNA). Anti-IFI16 autoantibodies occur in patients with Sjögren’s syndrome (SS) and associate with severe phenotypic features. We undertook this study to determine whether the structural and functional properties of IFI16 play a role in its status as an SS autoantigen. IFI16 immunostaining in labial salivary glands (LSGs) yielded striking evidence of filamentous IFI16 structures in the cytoplasm of ductal epithelial cells, representing the first microscopic description of IFI16 oligomerization in human tissues, to our knowledge. Transfection of cultured epithelial cells with dsDNA triggered the formation of cytoplasmic IFI16 filaments with similar morphology to those observed in LSGs. We found that a majority of SS anti-IFI16 autoantibodies immunoprecipitate IFI16 more effectively in the oligomeric dsDNA-bound state. Epitopes in the C-terminus of IFI16 are accessible to antibodies in the DNA-bound oligomer and are preferentially targeted by SS sera. Furthermore, cytotoxic lymphocyte granule pathways (highly enriched in the SS gland) induce striking release of IFI16•dsDNA complexes from cultured cells. Our studies reveal that IFI16 is present in a filamentous state in the target tissue of SS and suggest that this property of DNA-induced filament formation contributes to its status as an autoantigen in SS. These studies highlight the role that tissue-specific modifications and immune effector pathways might play in the selection of autoantigens in rheumatic diseases. 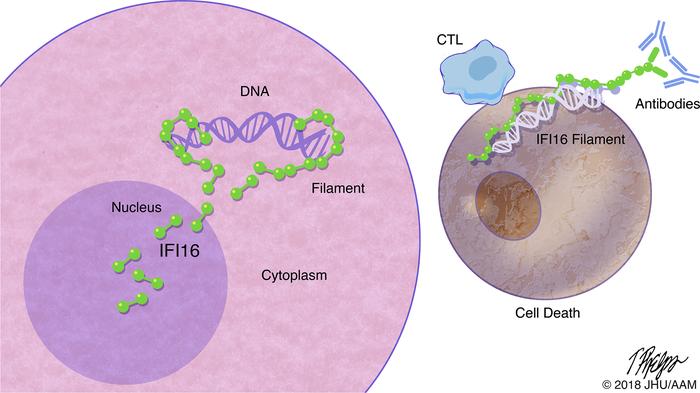