Conventional histologic diagnosis of rejection in kidney transplants has limited repeatability due to its inherent requirement for subjective assessment of lesions, in a rule-based system that does not acknowledge diagnostic uncertainty. Molecular phenotyping affords opportunities for increased precision and improved disease classification to address the limitations of conventional histologic diagnostic systems and quantify levels of uncertainty. Microarray data from 1,208 kidney transplant biopsies were collected prospectively from 13 centers. Cross-validated classifier scores predicting the presence of antibody-mediated rejection (ABMR), T cell–mediated rejection (TCMR), and 5 related histologic lesions were generated using supervised machine learning methods. These scores were used as input for archetypal analysis, an unsupervised method similar to cluster analysis, to examine the distribution of molecular phenotypes related to rejection. Six archetypes were generated: no rejection, TCMR, 3 associated with ABMR (early-stage, fully developed, and late-stage), and mixed rejection (TCMR plus early-stage ABMR). Each biopsy was assigned 6 scores, one for each archetype, representing a probabilistic assessment of that biopsy based on its rejection-related molecular properties. Viewed as clusters, the archetypes were similar to existing histologic Banff categories, but there was 32% disagreement, much of it probably reflecting the “noise” in the current histologic assessment system. Graft survival was lowest for fully developed and late-stage ABMR, and it was better predicted by molecular archetype scores than histologic diagnoses. The results provide a system for precision molecular assessment of biopsies and a new standard for recalibrating conventional diagnostic systems. 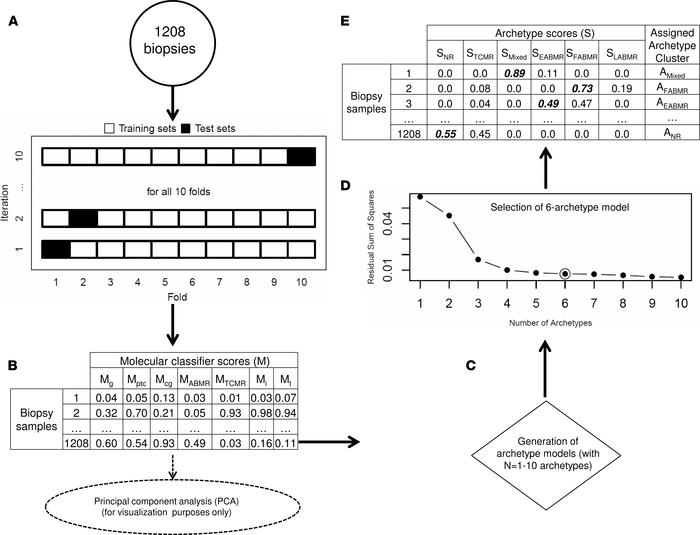 and show how the base classifiers (TCMR, ABMR, i > 1, t > 1, g > 0, cg > 0, ptc > 0) were developed, while show the archetypal analysis. For each of the 7 base classifiers: () 10-fold cross-validation is performed, randomly splitting the 1,208 biopsies into 10 folds of equal or near-equal size. For each of 10 iterations, 1 fold is left out as a test set (black box), and a classifier is developed using the remaining 9 folds (white boxes) as the training set. All aspects of classifier development, including probe set selection, are carried out from scratch within the training set samples at each iteration. The top 20 (by value) differentially expressed probe sets comparing the binary phenotypes within the training set are selected as input features for the classifier. Twelve different classifier algorithms are developed in each training set, generating 12 scores for each test set sample (1 for each classifier algorithm). The median of these 12 is used as each test set sample’s final score. This process is repeated over all 10 iterations, resulting in each biopsy being in a test set once and receiving a single value. This is repeated for each of the 7 base classifiers, resulting in a 1,208 × 7 matrix of classifier test set scores (). This data is used as the input for both the principal component analysis (used for visualizing the multivariate distribution) and the archetypal analysis (). We generated 10 archetype models (with = 1–10 archetypes) (). The residual sum of squares decreases with increasing numbers of archetypes (scree plot in ). We selected 6 archetypes (circled point in ) as the final archetypal model. () All biopsy samples are assigned a score for each of the 6 archetypes, and cluster assignments are made based on the highest score within that biopsy. The tables included show what typical data look like but do not represent actual results. S, archetype score; NR, no rejection; TCMR, T cell–mediated rejection; ABMR, antibody-mediated rejection; EABMR, early-stage ABMR; FABMR, fully developed ABMR; LABMR, late-stage ABMR; M, Molecular classifier scores; g, glomerulitis; cg, transplant glomerulopathy; ptc, peritubular capillaritis; i, interstitial inflammation; t, tubulitis