Ab-producing plasma cells (PCs) serve as key participants in countering pathogenic challenges as well as being contributors to autoimmune and malignant disorders. Thus far, only a limited number of PC–specific markers have been identified. The characterization of the unique variable lymphocyte receptor (VLR) Abs that are made by evolutionarily distant jawless vertebrates prompted us to investigate whether VLR Abs could detect novel PC antigens that have not been recognized by conventional Abs. Here, we describe a monoclonal lamprey Ab, VLRB MM3, that was raised against primary multiple myeloma cells. VLRB MM3 recognizes a unique epitope of the CD38 ectoenzyme that is present on plasmablasts and PCs from healthy individuals and on most, but not all, multiple myelomas. Binding by the VLRB MM3 Ab coincides with CD38 dimerization and NAD glycohydrolase activity. Our data demonstrate that the lamprey VLRB MM3 Ab is a unique reagent for the identification of plasmablasts and PCs, with potential applications in the diagnosis and therapeutic intervention of PC or autoimmune disorders. 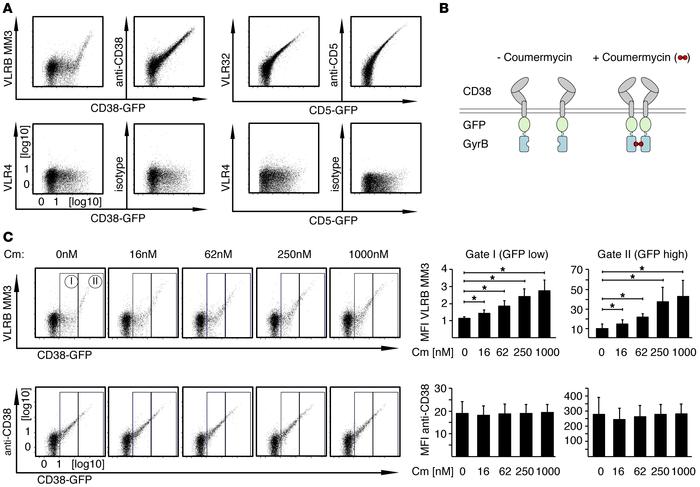