T cells play a prominent role in orchestrating the immune response to viral diseases, but their role in the clinical presentation and subsequent immunity to SARS-CoV-2 infection remains poorly understood. As part of a population-based survey of the municipality of Vo’, Italy, conducted after the initial SARS-CoV-2 outbreak, we sampled the T cell receptor (TCR) repertoires of the population 2 months after the initial PCR survey and followed up positive cases 9 and 15 months later. At 2 months, we found that 97.0% (98 of 101) of cases had elevated levels of TCRs associated with SARS-CoV-2. T cell frequency (depth) was increased in individuals with more severe disease. Both depth and diversity (breadth) of the TCR repertoire were positively associated with neutralizing antibody titers, driven mostly by CD4+ T cells directed against spike protein. At the later time points, detection of these TCRs remained high, with 90.7% (78 of 96) and 86.2% (25 of 29) of individuals having detectable signal at 9 and 15 months, respectively. Forty-three individuals were vaccinated by month 15 and showed a significant increase in TCRs directed against spike protein. Taken together, these results demonstrate the central role of T cells in mounting an immune defense against SARS-CoV-2 that persists out to 15 months. 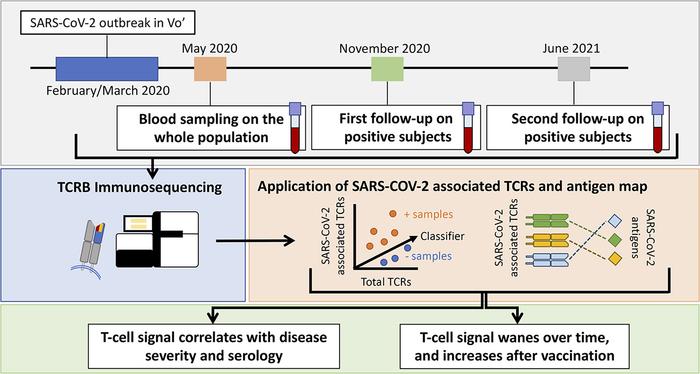