With the advent of cancer immunology, mass cytometry has been increasingly employed to characterize the responses to cancer therapies and the tumor microenvironment (TME). One of its most notable applications is efficient multiplexing of samples into batches by dedicating a number of metal isotope channels to barcodes, enabling robust data acquisition and analysis. Barcoding is most effective when markers are present in all cells of interest. While CD45 has been shown to be a reliable marker for barcoding all immune cells in a given sample, a strategy to reliably barcode mouse cancer cells has not been demonstrated. To this end, we identified CD29 and CD98 as markers widely expressed by commonly used mouse cancer cell lines. We conjugated anti-CD29 and anti-CD98 antibodies to cadmium or indium metals and validated their utility in 10-plex barcoding of live cells. Finally, we established a potentially novel barcoding system incorporating the combination of CD29, CD98, and CD45 to multiplex 10 tumors from s.c. MC38 and KPC tumor models, while successfully recapitulating the known contrast in the PD1-PDL1 axis between the 2 models. The ability to barcode tumor cells along with immune cells empowers the interrogation of the tumor-immune interactions in mouse TME studies. 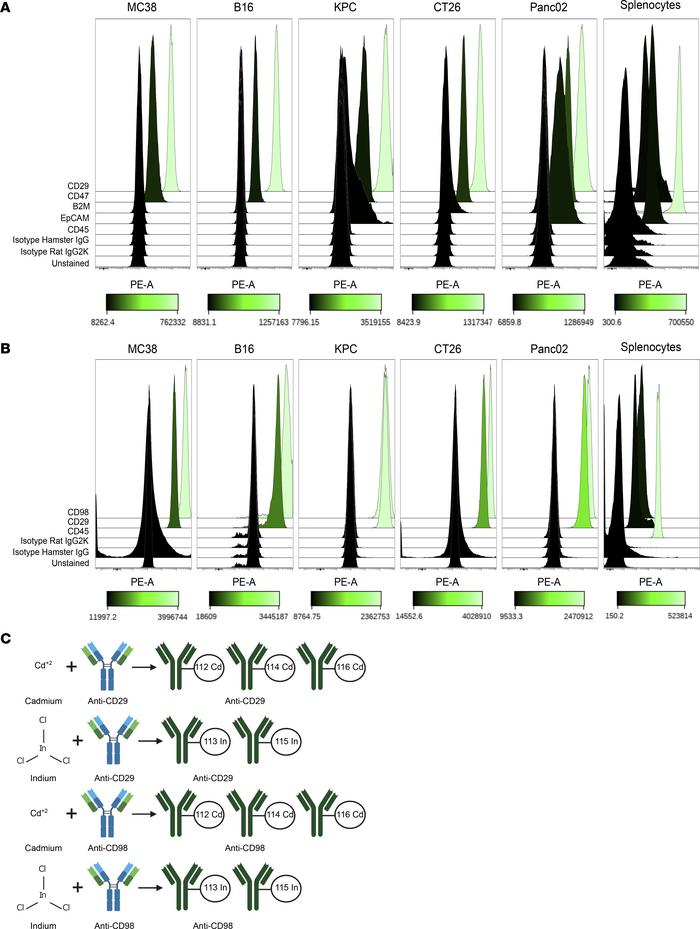