BACKGROUND The airways of obese asthmatics have been shown to be NO deficient, and this contributes to airway dysfunction and reduced response to inhaled corticosteroids. In cultured airway epithelial cells, L-citrulline, a precursor of L-arginine recycling and NO formation, has been shown to prevent asymmetric dimethyl arginine–mediated (ADMA-mediated) NO synthase (NOS2) uncoupling, restoring NO and reducing oxidative stress.METHODS In a proof-of-concept, open-label pilot study in which participants were analyzed before and after treatment, we hypothesized that 15 g/d L-citrulline for 2 weeks would (a) increase the fractional excretion of NO (FeNO), (b) improve asthma control, and (c) improve lung function. To this end, we recruited obese (BMI >30) asthmatics on controller therapy, with a baseline FeNO of ≤30 ppb from the University of Colorado Medical Center and Duke University Health System.RESULTS A total of 41 subjects with an average FeNO of 17 ppb (95% CI, 15–19) and poorly controlled asthma (average asthma control questionnaire [ACQ] 1.5 [95% CI, 1.2–1.8]) completed the study. Compared with baseline, L-citrulline increased whereas ADMA and arginase concentration did not (values represent the mean Δ and 95% CI): plasma L-citrulline (190 μM, 84–297), plasma L-arginine (67 μM, 38–95), and plasma L-arginine/ADMA (ratio 117, 67–167). FeNO increased by 4.2 ppb (1.7–6.7 ppb); ACQ decreased by –0.46 (–0.67 to 0.27 points); the forced vital capacity and forced exhalation volume in 1 second, respectively, changed by 86 ml (10–161 ml) and 52 ml (–11 to 132 ml). In a secondary analysis, the greatest FEV1 increments occurred in those subjects with late-onset asthma (>12 years) (63 ml [95% CI, 1–137]), in females (80 ml [95% CI, 5–154]), with a greater change seen in late-onset females (100 ml, [95% CI, 2–177]). The changes in lung function or asthma control were not significantly associated with the changes before and after treatment in L-arginine/ADMA or FeNO.CONCLUSION Short-term L-citrulline treatment improved asthma control and FeNO levels in obese asthmatics with low or normal FeNO. Larger FEV1 increments were observed in those with late-onset asthma and in females.TRIAL REGISTRATION ClinicalTrials.gov NCT01715844.FUNDING NIH NHLBI R01 HL146542-01. 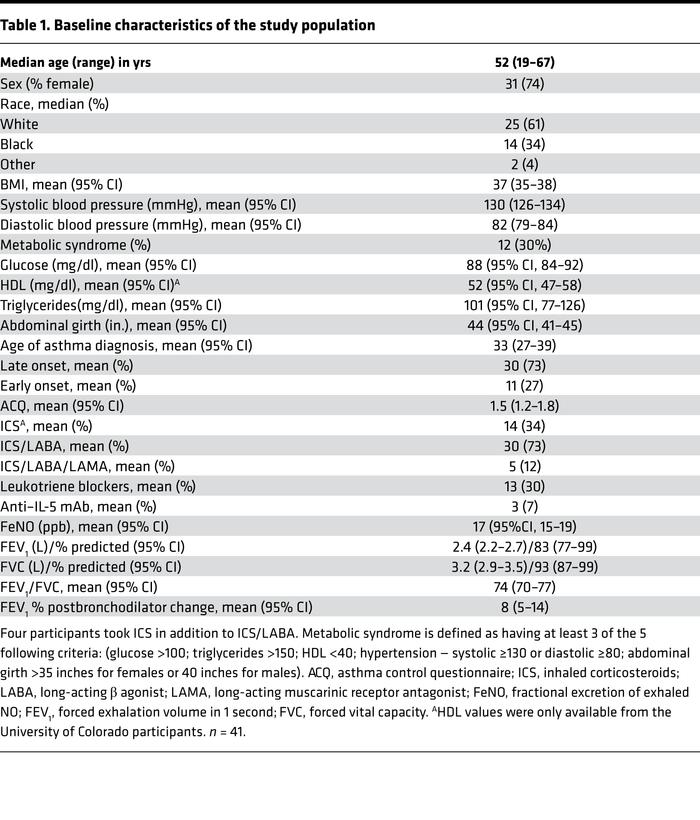 Baseline characteristics of the study population