Endothelial cells are important in the maintenance of healthy blood vessels and in the development of vascular diseases. However, the origin and dynamics of endothelial precursors and remodeling at the single-cell level have been difficult to study in vivo owing to technical limitations. Therefore, we aimed to develop a direct visual approach to track the fate and function of single endothelial cells over several days and weeks in the same vascular bed in vivo using multiphoton microscopy (MPM) of transgenic Cdh5-Confetti mice and the kidney glomerulus as a model. Individual cells of the vascular endothelial lineage were identified and tracked owing to their unique color combination, based on the random expression of cyan/green/yellow/red fluorescent proteins. Experimental hypertension, hyperglycemia, and laser-induced endothelial cell ablation rapidly increased the number of new glomerular endothelial cells that appeared in clusters of the same color, suggesting clonal cell remodeling by local precursors at the vascular pole. Furthermore, intravital MPM allowed the detection of distinct structural and functional alterations of proliferating endothelial cells. No circulating Cdh5-Confetti+ cells were found in the renal cortex. Moreover, the heart, lung, and kidneys showed more significant clonal endothelial cell expansion compared with the brain, pancreas, liver, and spleen. In summary, we have demonstrated that serial MPM of Cdh5-Confetti mice in vivo is a powerful technical advance to study endothelial remodeling and repair in the kidney and other organs under physiological and disease conditions.

In vivo serial MPM imaging of the clonal expansion and function of local GEnC precursors. 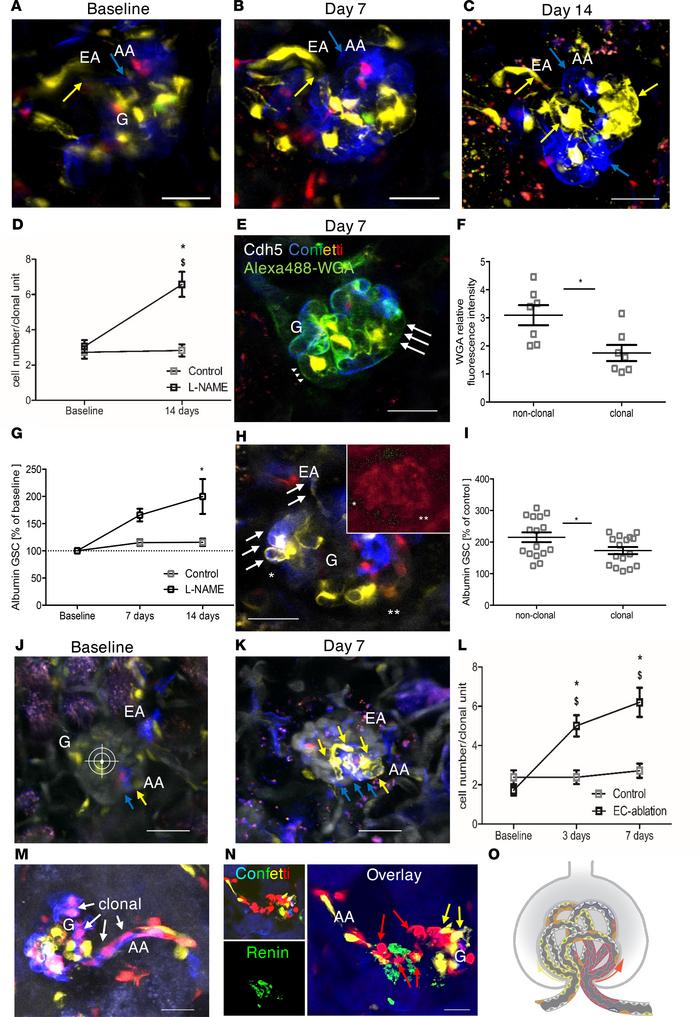