The analysis and validation of flow cytometry–based biomarkers in clinical studies are limited by the lack of standardized protocols that are reproducible across multiple centers and suitable for use with either unfractionated blood or cryopreserved PBMCs. Here we report the development of a platform that standardizes a set of flow cytometry panels across multiple centers, with high reproducibility in blood or PBMCs from either healthy subjects or patients 100 days after hematopoietic stem cell transplantation. Inter-center comparisons of replicate samples showed low variation, with interindividual variation exceeding inter-center variation for most populations (coefficients of variability <20% and interclass correlation coefficients >0.75). Exceptions included low-abundance populations defined by markers with indistinct expression boundaries (e.g., plasmablasts, monocyte subsets) or populations defined by markers sensitive to cryopreservation, such as CD62L and CD45RA. Automated gating pipelines were developed and validated on an independent data set, revealing high Spearman’s correlations (rs >0.9) with manual analyses. This workflow, which includes pre-formatted antibody cocktails, standardized protocols for acquisition, and validated automated analysis pipelines, can be readily implemented in multicenter clinical trials. This approach facilitates the collection of robust immune phenotyping data and comparison of data from independent studies.

Generation of automated data analysis pipelines for the DuraClone B cell panel. 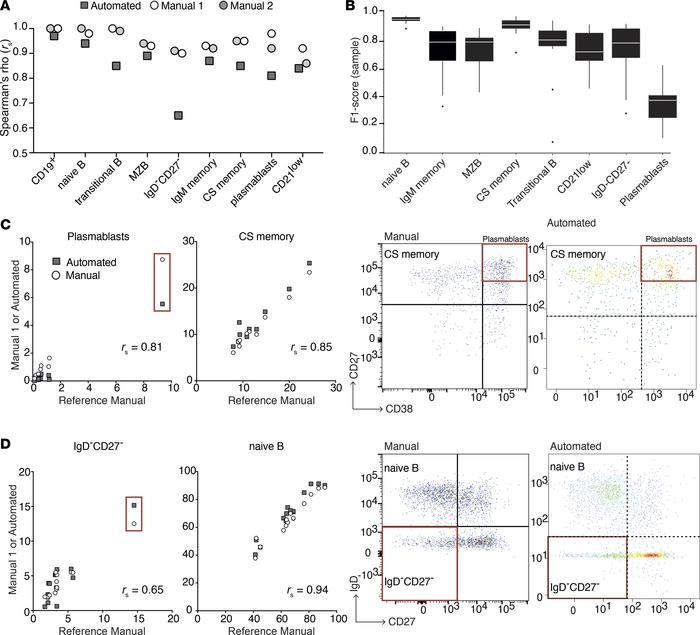 The proportions of cell populations indicated in for the B cell panel were determined in unfractionated blood from healthy ( = 9) and HSCT ( = 5) subjects using automated gating, 2 different manual analyzers (Manual 1, Manual 2), or a reference manual analyzer. Data with event counts under threshold values for key gates were not included (see Methods, ). Data from Manual 1 or 2, or automated gating were compared with those from the reference manual to determine () Spearman’s correlation coefficients (RS) or () F1 scores. Box-and-whisker plot: midline is the median, box is the IQR, and the whiskers extend to 1.5 times the IQR. ( and ) Correlation graphs and representative manual and automated plots and gates for () plasmablasts and class-switched (CS) memory B cells, both derived from the CD27 versus CD38 plot, pre-gated on IgM–IgD– B cells; or () naive and IgD–CD27– B cells. Red boxes indicate data points and manual or automated gates from which they were derived for the samples with outlying proportions of plasmablasts or IgD–CD27– cells.