Fabry disease, the most common lysosomal storage disease, affects multiple organs and results in a shortened life span. This disease is caused by a deficiency of the lysosomal enzyme α-galactosidase A, which leads to glycosphingolipid accumulation in many cell types. Neuropathic pain is an early and severely debilitating symptom in patients with Fabry disease, but the cellular and molecular mechanisms that cause the pain are unknown. We generated a rat model of Fabry disease, the first nonmouse model to our knowledge. Fabry rats had substantial serum and tissue accumulation of α-galactosyl glycosphingolipids and had pronounced mechanical pain behavior. Additionally, Fabry rat dorsal root ganglia displayed global N-glycan alterations, sensory neurons were laden with inclusions, and sensory neuron somata exhibited prominent sensitization to mechanical force. We found that the cation channel transient receptor potential ankyrin 1 (TRPA1) is sensitized in Fabry rat sensory neurons and that TRPA1 antagonism reversed the behavioral mechanical sensitization. This study points toward TRPA1 as a potentially novel target to treat the pain experienced by patients with Fabry disease. 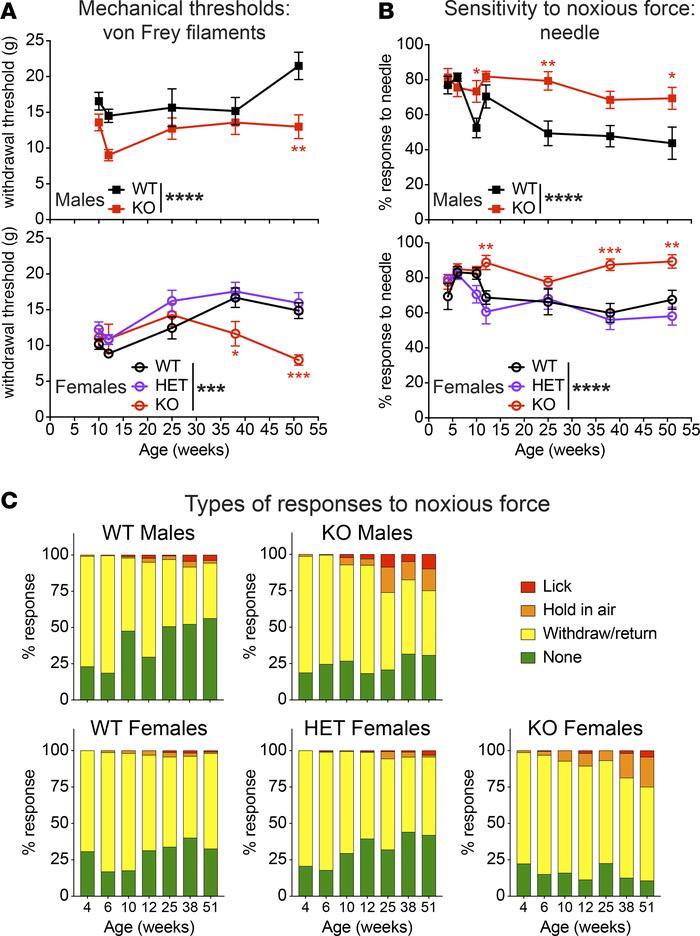 () The von Frey up-down method was performed on WT and KO male and WT, heterozygous (HET), and KO female rat hind paws, and withdrawal thresholds were compared. () A 25-gauge spinal anesthesia needle was applied to rat hind paws 10 times, and the percent response to the needle was recorded. () At each time point (4, 6, 10, 12, 25, 38, and 51 weeks), the frequency of response type to the needle is shown. and show mean ± SEM and include ≥8 individual rats in each data point. See for the precise number of animals studied at each time point. Two-way ANOVA was performed on and to determine the overall genotype effect, and the significance is shown to the right of each legend. To determine genotype differences at each time point studied, multiple comparisons with Bonferroni’s correction were performed. * < 0.05, ** < 0.01, *** < 0.001, **** < 0.0001.