Hypoglycemia is commonly associated with insulin therapy, limiting both its safety and efficacy. The concept of modifying insulin to render its glucose-responsive release from an injection depot (of an insulin complexed exogenously with a recombinant lectin) was proposed approximately 4 decades ago but has been challenging to achieve. Data presented here demonstrate that mannosylated insulin analogs can undergo an additional route of clearance as result of their interaction with endogenous mannose receptor (MR), and this can occur in a glucose-dependent fashion, with increased binding to MR at low glucose. Yet, these analogs retain capacity for binding to the insulin receptor (IR). When the blood glucose level is elevated, as in individuals with diabetes mellitus, MR binding diminishes due to glucose competition, leading to reduced MR-mediated clearance and increased partitioning for IR binding and consequent glucose lowering. These studies demonstrate that a glucose-dependent locus of insulin clearance and, hence, insulin action can be achieved by targeting MR and IR concurrently. 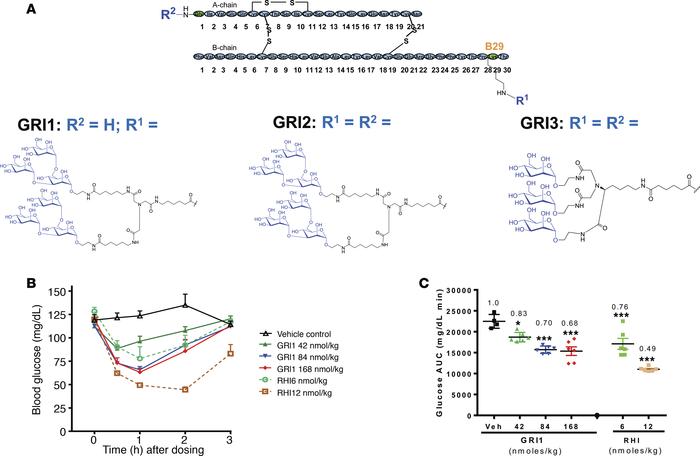 () Schematics of GRI1, GRI2, and GRI3 molecules with their sugar and linker structures. () GRI1-induced glucose lowering in C57BL/6 mice after a single s.c. injection. () Glucose AUC was calculated, and fold changes over vehicle are shown. = 4–6 per group. * < 0.05, *** < 0.001 vs. vehicle group by 2-way ANOVA with Dunnett’s test. Results are shown as mean ± SEM of values and represent 3 independent experiments.