Memory T cells pose a significant problem to successful therapeutic control of unwanted immune responses during autoimmunity and transplantation, as they are differentially controlled by cosignaling receptors such as CD28 and CTLA-4. Treatment with abatacept and belatacept impede CD28 signaling by binding to CD80 and CD86, but they also have the unintended consequence of blocking the ligands for CTLA-4, a process that may inadvertently boost effector responses. Here, we show that a potentially novel anti-CD28 domain antibody (dAb) that selectively blocks CD28 but preserves CTLA-4 coinhibition confers improved allograft survival in sensitized recipients as compared with CTLA-4 Ig. However, both CTLA-4 Ig and anti-CD28 dAb similarly and significantly reduced the accumulation of donor-reactive CD8+ memory T cells, demonstrating that regulation of the expansion of CD8+ memory T cell populations is controlled in part by CD28 signals and is not significantly impacted by CTLA-4. In contrast, selective CD28 blockade was superior to CTLA-4 Ig in inhibiting IFN-γ, TNF, and IL-2 production by CD8+ memory T cells, which in turn resulted in reduced recruitment of innate CD11b+ monocytes into allografts. Importantly, this superiority was CTLA-4 dependent, demonstrating that effector function of CD8+ memory T cells is regulated by the balance of CD28 and CTLA-4 signaling. 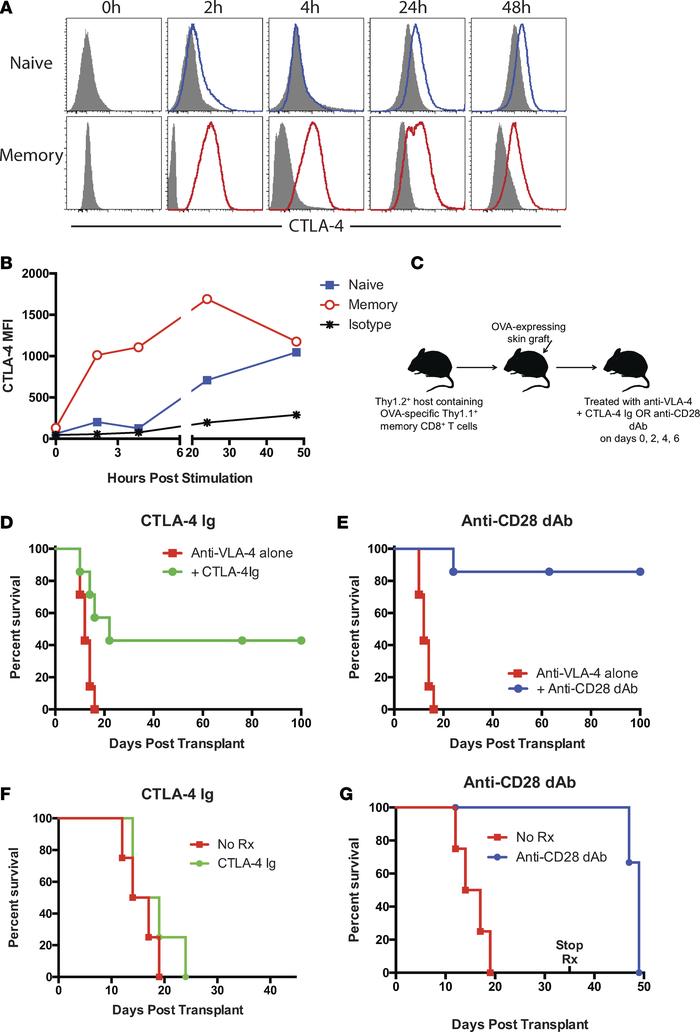 ( and ) Naive or memory OVA-specific OT-I T cells (1 × 106 cells; generated in vitro by antigen exposure followed by rest in IL-15–containing media as described ref. ) were stimulated with B6 splenocytes and 10 nM SIINFEKL peptide for 0, 2, 4, 24, or 48 hours. CD8+ T cells were stained intracellularly for CTLA-4 (filled histograms indicate isotype control). () CTLA-4 MFI on naive and memory T cells over time. Data are representative of 3 independent experiments. () Experimental design in which 1 × 104 Thy1.1+ OT-I T cells are adoptively transferred into naive B6 Thy1.2 hosts and infected with -OVA as described in Methods in order to generate recipients containing memory OT-I T cells. On day 30 after infection, mice received an OVA-expressing skin graft and were treated with 200 μg CTLA-4 Ig or 100 μg anti-CD28 dAb (both in the presence of 250 μg anti–VLA-4) on days 0, 2, 4, and 6 after transplant. ( and ) Graft survival curves showing accelerated rejection in animals treated with CTLA-4 Ig () relative to those treated with anti-CD28 dAb (). Data are cumulative results of = 8 mice/group from 2 independent experiments. ( and ) Recipients were primed with OVA-expressing skin grafts, allowed to reject, and regrafted on the contralateral torso on week 10. Animals were treated with 200 μg CTLA-4 Ig () or 100 μg anti-CD28 dAb () on days 0, 2, 4, and 6 and then weekly until day 35. = 4 mice/group. dAb, domain antibody.