Despite the fact that many therapeutic strategies have been adopted to delay the development of sepsis, sepsis remains one of the leading causes of death in noncoronary intensive care units. Recently, sepsis-3 was defined as life-threatening organ dysfunction due to a dysregulated host response to infection. Here, we report that swiprosin-1 (also known as EFhd2) plays an important role in the macrophage immune response to LPS-induced or cecal ligation and puncture–induced (CLP-induced) sepsis in mice. Swiprosin-1 depletion causes higher mortality, more severe organ dysfunction, restrained macrophage recruitment in the lung and kidney, and attenuated inflammatory cytokine production (including IL-1β, IL-6, TNF-α, IL-10, and IFN-γ). The immunosuppression caused by swiprosin-1 deficiency is manifested by impaired bactericidal capacity and decreased HLA-DR expression in macrophages. Swiprosin-1 affects the activation of the JAK2/STAT1/STAT3 pathway by regulating the expression of IFN-γ receptors in macrophages. Our findings provide a potential target for the regulation of the macrophage immune response in sepsis.

Swiprosin-1 deficiency attenuates the activation of the JAK2/STAT1/STAT3 pathway and the expression of IFN-γR in LPS-treated peritoneal macrophages. 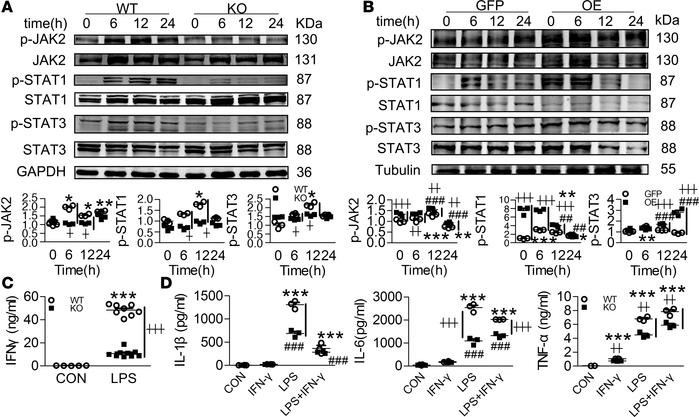