While the treatment of inflammatory disorders is generally based on inhibiting factors that drive onset of inflammation, these therapies can compromise healing (NSAIDs) or dampen immunity against infections (biologics). In search of new antiinflammatories, efforts have focused on harnessing endogenous pathways that drive resolution of inflammation for therapeutic gain. Identification of specialized pro-resolving mediators (SPMs) (lipoxins, resolvins, protectins, maresins) as effector molecules of resolution has shown promise in this regard. However, their action on inflammatory resolution in humans is unknown. Here, we demonstrate using a model of UV-killed Escherichia coli–triggered skin inflammation that SPMs are biosynthesized at the local site at the start of resolution, coinciding with the expression of receptors that transduce their actions. These include receptors for lipoxin A4 (ALX/FPR2), resolvin E1 (ChemR23), resolvin D2 (GPR18), and resolvin D1 (GPR32) that were differentially expressed on the endothelium and infiltrating leukocytes. Administering SPMs into the inflamed site 4 hours after bacterial injection caused a reduction in PMN numbers over the ensuing 6 hours, the phase of active resolution in this model. These results indicate that in humans, the appearance of SPMs and their receptors is associated with the beginning of inflammatory resolution and that their therapeutic supplementation enhanced the resolution response.

SPM receptors are differentially expressed on the endothelium and the infiltrating leukocytes — GPR18 and GPR32. 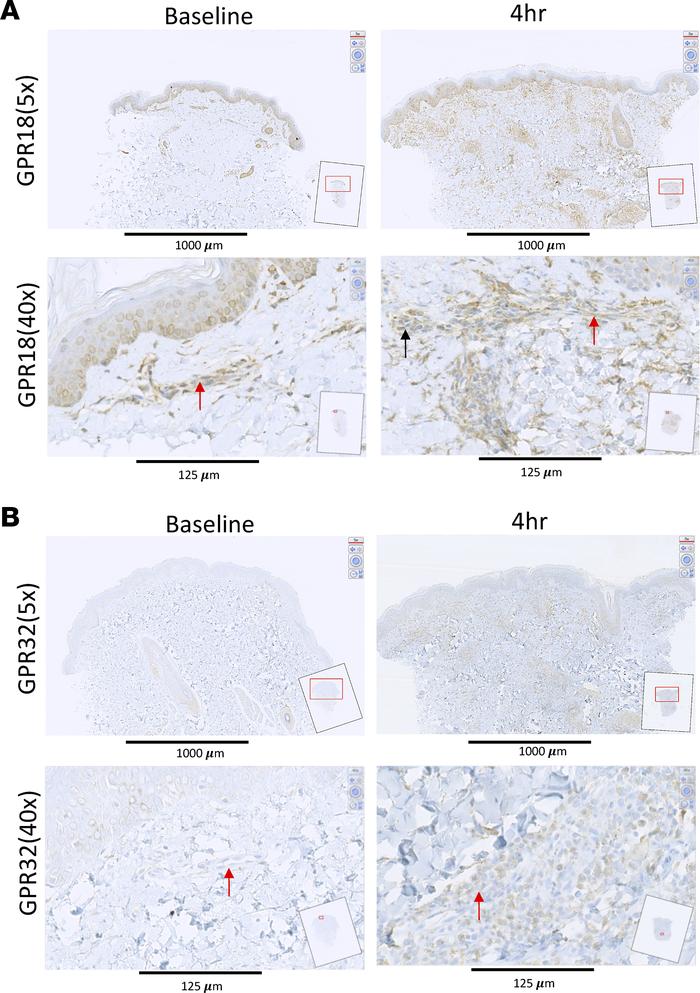 Acute inflammation was triggered in the ventral aspect of forearms of healthy volunteers by the intradermal injection of 1.5 × 107 UV-killed . (UVkEc) suspended in 100 μl of sterile saline. Four hours after injection, a 3-mm skin punch biopsy was taken from the inflamed site under local anaesthesia. Naive skin was treated as baseline. Formalin-fixed paraffin-embedded skin sections were probed by immunohistochemistry for receptor identification. Low-magnification (×5) and high-magnification (×40) images at baseline and at the 4-hour time point are shown here for GPR18 () and GPR32 (). Red arrows highlight the endothelium and the black arrow highlights the infiltrating leukocytes. Representative images from ( = 3). SPM, specialized pro-resolving mediator.