Pancreatitis is more frequent in type 2 diabetes mellitus (T2DM), although the underlying cause is unknown. We tested the hypothesis that ongoing β cell stress and apoptosis in T2DM induces ductal tree proliferation, particularly the pancreatic duct gland (PDG) compartment, and thus potentially obstructs exocrine outflow, a well-established cause of pancreatitis. PDG replication was increased 2-fold in human pancreas from individuals with T2DM, and was associated with increased pancreatic intraepithelial neoplasia (PanIN), lesions associated with pancreatic inflammation and with the potential to obstruct pancreatic outflow. Increased PDG replication in the prediabetic human-IAPP-transgenic (HIP) rat model of T2DM was concordant with increased β cell stress but preceded metabolic derangement. Moreover, the most abundantly expressed chemokines released by the islets in response to β cell stress in T2DM, CXCL1, -4, and -10, induced proliferation in human pancreatic ductal epithelium. Also, the diabetes medications reported as potential modifiers for the risk of pancreatitis in T2DM modulated PDG proliferation accordingly. We conclude that chronic stimulation and proliferation of the PDG compartment in response to islet inflammation in T2DM is a potentially novel mechanism that serves as a link to the increased risk for pancreatitis in T2DM and may potentially be modified by currently available diabetes therapy. 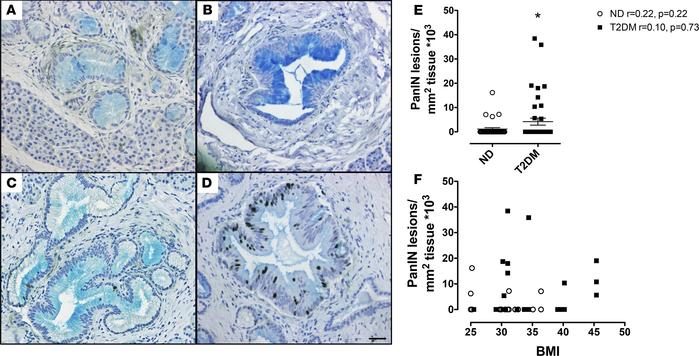