Tregs hold great promise as a cellular therapy for multiple immunologically mediated diseases, given their ability to control immune responses. The success of such strategies depends on the expansion of healthy, suppressive Tregs ex vivo and in vivo following the transfer. In clinical studies, levels of transferred Tregs decline sharply in the blood within a few days of the transfer. Tregs have a high rate of apoptosis. Here, we describe a new mechanism of Treg self-inflicted damage. We show that granzymes A and -B (GrA and GrB), which are highly upregulated in human Tregs upon stimulation, leak out of cytotoxic granules to induce cleavage of cytoplasmic and nuclear substrates, precipitating apoptosis in target cells. GrA and GrB substrates were protected from cleavage by inhibiting granzyme activity in vitro. Additionally, we show — by using cytometry by time of flight (CYTOF) — an increase in GrB-expressing Tregs in the peripheral blood and renal allografts of transplant recipients undergoing rejection. These GrB-expressing Tregs showed an activated phenotype but were significantly more apoptotic than non–GrB expressing Tregs. This potentially novel finding improves our understanding of Treg survival and suggests that manipulating Gr expression or activity might be useful for designing more effective Treg therapies.

Characterization and phenotyping of GrB+ and GrB– Tregs by various coinhibitory, costimulatory, and homing markers. 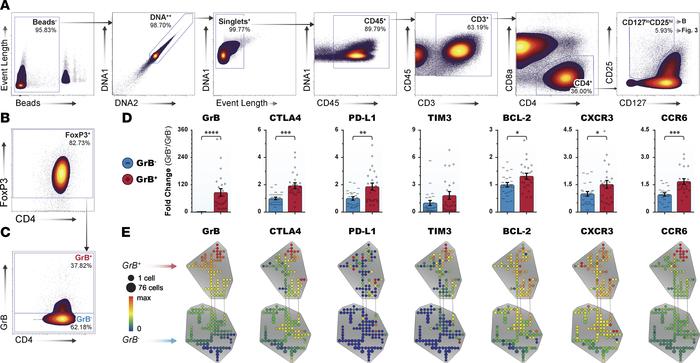 () CyTOF gating strategy used to identify the () CD4+CD127loCD25hiFoxP3+ cell population from the PBMCs of renal transplant patients to study the () GrB+ and GrB– subsets. () Bar graphs show the fold change difference between the GrB subsets, based on their mean fluorescence intensity for the displayed markers. The primary GrB graph verifies that the chosen subsets are indeed GrB– and GrB+ cells (86.2 ± 16.5, **** < 0.0001), while the other graphs show that, among GrB+ Tregs, there is an increased expression of the coinhibitory markers CTLA4 (1.93 ± 0.22, < 0.001), PD-L1 (1.87 ± 0.26, < 0.01), TIM3 (1.83 ± 0.43), the anti-apoptotic BCL-2 (1.32 ± 0.11, < 0.05), and lastly the homing markers CXCR3 (1.52 ± 0.21, < 0.05) and CCR6 (1.68 ± 0.15, < 0.001). () Representative SPADE trees reiterate the notably increased activation state of GrB+ Tregs compared with the GrB– counterpart. Despite the heterogeneity of expression patterns in the 2 subsets, GrB+ Tregs demonstrate higher expression of coinhibitory, antiapoptotic, and homing markers. Each node represents a cell population, while the size of a node within the SPADE tree corresponds to the number of cells per population, and the node color indicates the signal intensity of the respective markers. BCL-2, B cell lymphoma 2; CCR6, C-C chemokine receptor 6; CTLA4, cytotoxic T-lymphocyte-associated protein 4; CXCR3, C-X-C chemokine receptor 3; FoxP3, forkhead box P3; GrB, granzyme B; PD-L1, programmed cell death protein 1; TIM3, T cell immunoglobulin and mucin-domain containing-3.