The role for neutrophil extracellular traps in cystic fibrosis autoimmunity

The role for neutrophil extracellular traps in cystic fibrosis autoimmunity

While respiratory failure in cystic fibrosis (CF) frequently associates with chronic infection by , no single factor predicts the extent of lung damage in CF. To elucidate other causes, we studied the autoantibody profile in CF and rheumatoid arthritis (RA) patients, given the similar association of airway inflammation and autoimmunity in RA. Even though we observed that bactericidal permeability-increasing protein (BPI), carbamylated proteins, and citrullinated proteins all localized to the neutrophil extracellular traps (NETs), which are implicated in the development of autoimmunity, our study demonstrates striking autoantibody specificity in CF. Particularly, CF patients developed anti-BPI autoantibodies but hardly any anti-citrullinated protein autoantibodies (ACPA). In contrast, ACPA-positive RA patients exhibited no reactivity with BPI. Interestingly, anti-carbamylated protein autoantibodies (ACarPA) were found in both cohorts but did not cross-react with BPI. Contrary to ACPA and ACarPA, anti-BPI autoantibodies recognized the BPI C-terminus in the absence of posttranslational modifications. In fact, we discovered that . –mediated NET formation results in BPI cleavage by . elastase, which suggests a novel mechanism in the development of autoimmunity to BPI. In accordance with this model, autoantibodies associated with presence of . on sputum culture. Finally, our results provide a role for autoimmunity in CF disease severity, as autoantibody levels associate with diminished lung function.

BPI and carbamylated proteins are localized on neutrophil extracellular traps. 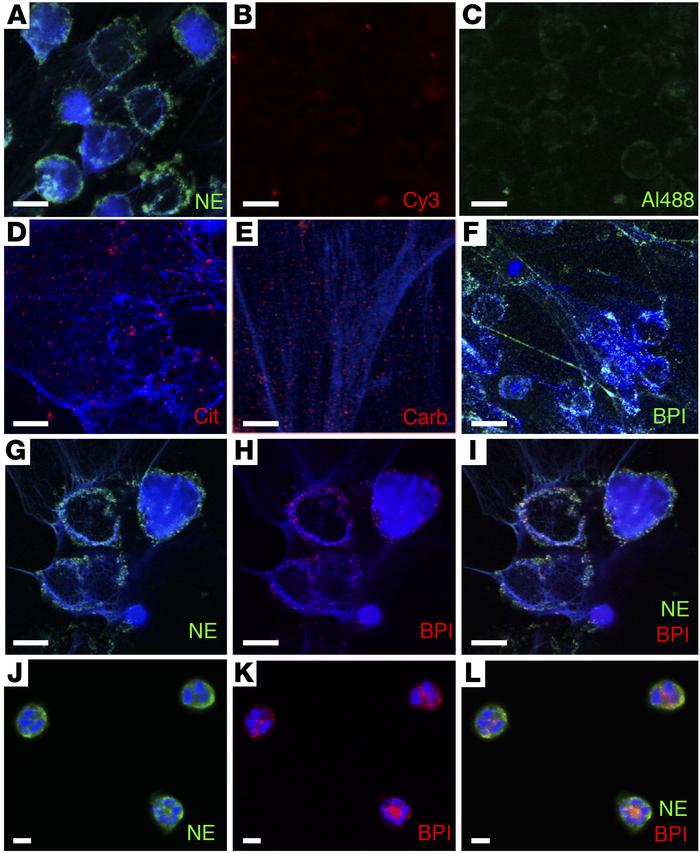