IFN-ε is a unique type I IFN that is not induced by pattern recognition response elements. IFN-ε is constitutively expressed in mucosal tissues, including the female genital mucosa. Although the direct antiviral activity of IFN-ε was thought to be weak compared with IFN-α, IFN-ε controls and herpes simplex virus 2 in mice, possibly through modulation of immune response. We show here that IFN-ε induces an antiviral state in human macrophages that blocks HIV-1 replication. IFN-ε had little or no protective effect in activated CD4+ T cells or transformed cell lines unless activated CD4+ T cells were infected with replication-competent HIV-1 at a low MOI. The block to HIV infection of macrophages was maximal after 24 hours of treatment and was reversible. IFN-ε acted on early stages of the HIV life cycle, including viral entry, reverse transcription, and nuclear import. The protection did not appear to operate through known type I IFN-induced HIV host restriction factors, such as APOBEC3A and SAMHD1. IFN-ε–stimulated immune mediators and pathways had the signature of type I IFNs but were distinct from IFN-α in macrophages. IFN-ε induced significant phagocytosis and ROS, which contributed to the block to HIV replication. These findings indicate that IFN-ε induces an antiviral state in macrophages that is mediated by different factors than those induced by IFN-α. Understanding the mechanism of IFN-ε–mediated HIV inhibition through immune modulation has implications for prevention. 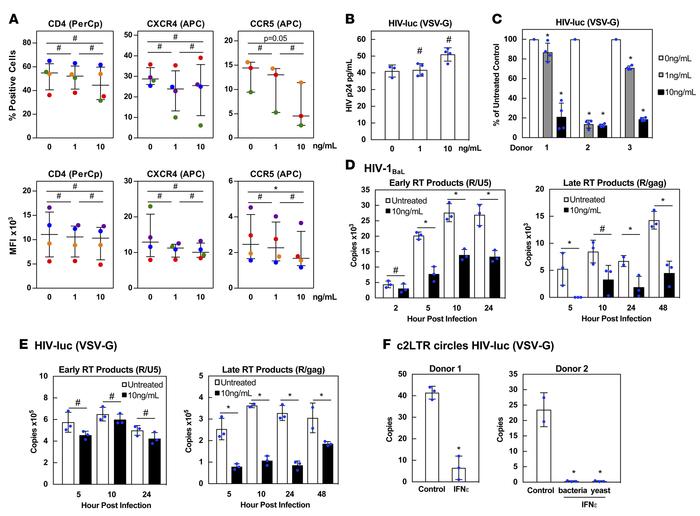