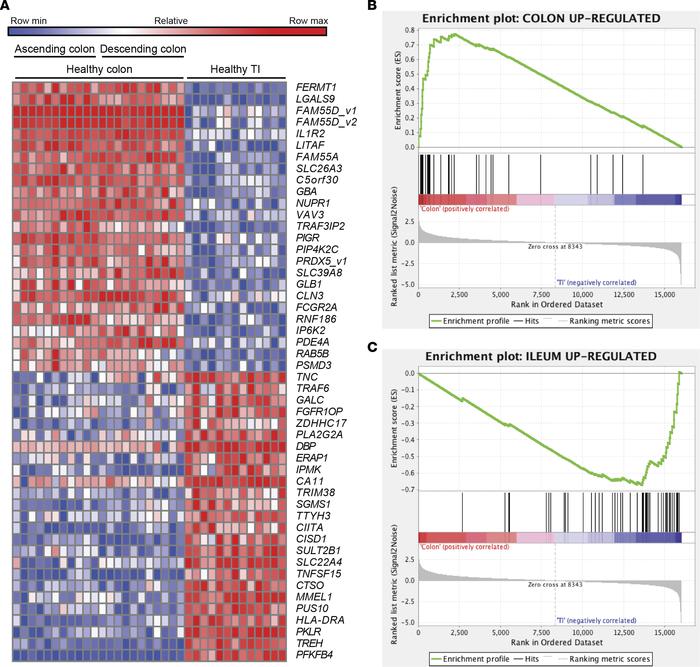 () In healthy controls, a unique set of genes is differentially expressed in the terminal ileum (TI) versus colon, but not between ascending and descending colon, suggesting tissue specificity between TI and colon, but not specific expression in the ascending or descending colon. The heat map is colored in a row-normalized fashion, i.e., red indicates the highest value for that specific gene, and blue indicates the lowest value for the same gene. Statistical significance of genes between TI samples ( = 13) and colon samples ( = 24) was estimated by computing the signal-to-noise ratio statistic. Genes with FDR-adjusted values of ≤0.05 and signal-to-noise ratios >0.9 (absolute value) were selected as significant. The top 25 upregulated and downregulated significant genes are shown. ( and ) Using a publicly available microarray data set (GSE16879) for gene expression from 6 healthy TI and colon samples, the differential signature of 116 genes between healthy colon and TI was tested for significance as independent validation. Colon-specific upregulated genes were enriched and upregulated in the colon samples (FDR = 0.008; gene set enrichment analysis [GSEA] = 0.0045, hypergeometric test), whereas the TI-specific upregulated genes were enriched in the downregulated genes from the colon samples (FDR = 0.005; GSEA = 0.0013, hypergeometric test). The GSEA-based enrichment score (ES) reflects the degree to which a gene set is overrepresented at the top or bottom of a ranked list of genes. GSEA calculates the ES by going down the ranked list of genes, increasing a running-sum statistic when a gene is in the gene set and decreasing it when it is not. The magnitude of the increment depends on the correlation of the gene with the phenotype. The ES is the maximum deviation from 0 encountered in going down the list. A positive ES indicates gene set enrichment at the top of the ranked list; a negative ES indicates gene set enrichment at the bottom of the ranked list.