To derive new insights in diabetic complications, we integrated publicly available human protein-protein interaction (PPI) networks with global metabolic networks using metabolomic data from patients with diabetic nephropathy. We focused on the participating proteins in the network that were computationally predicted to connect the urine metabolites. had the highest significant number of PPI connections. As validation, significant downregulation of gene expression was found in both glomerular and tubulointerstitial compartments of kidney biopsy tissue from 2 independent cohorts of patients with diabetic nephropathy. In diabetic mice, chemical inhibition of with Nutlin-3a led to reduction in the number of podocytes, increased blood urea nitrogen, and increased mortality. Addition of Nutlin-3a decreased + cells in embryonic kidneys. Both podocyte- and tubule-specific -knockout mice exhibited severe glomerular and tubular dysfunction, respectively. Interestingly, the only 2 metabolites that were reduced in both podocyte and tubule-specific -knockout mice were 3-methylcrotonylglycine and uracil, both of which were also reduced in human diabetic kidney disease. Thus, our bioinformatics tool combined with multi-omics studies identified an important functional role for in glomeruli and tubules of the diabetic nephropathic kidney and links to a reduction in 2 key metabolite biomarkers.

Effect on renal development and WT1 expression in a 17.5-day embryonic kidney in response to Nutlin-3a treatment. 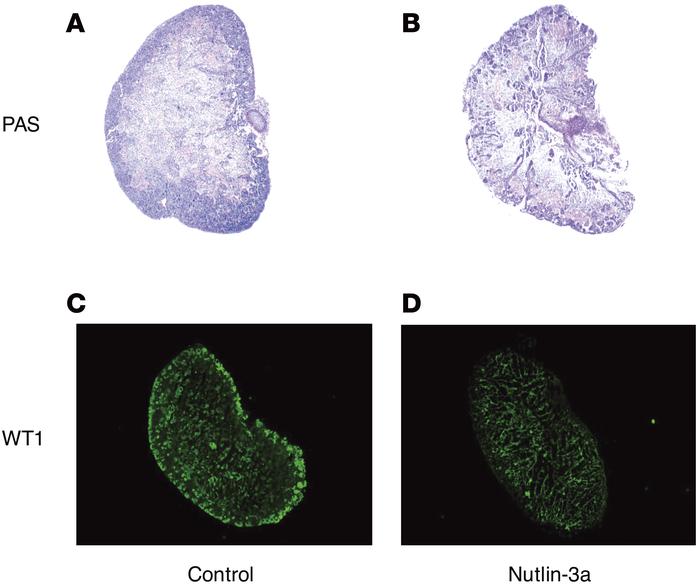 Periodic acid–Schiff (PAS) staining of kidney sections ( and ) and immunofluorescent staining using polyclonal antibody against WT1 (green, and ) in a 17.5-day embryonic kidney treated with 5 μM Nutlin-3a or DMSO for 5 days. Representative from = 3/group. Magnification, ×10.