Mutations of the gene in humans and rats cause osteopetrosis, an inherited bone disease characterized by diminished bone resorption by osteoclasts. PLEKHM1 binds to RAB7 and is critical for lysosome trafficking. However, the molecular mechanisms by which PLEKHM1 regulates lysosomal pathways remain unknown. Here, we generated germline and conditional -deficient mice. These mice displayed no overt abnormalities in major organs, except for an increase in trabecular bone mass. Furthermore, loss of PLEKHM1 abrogated the peripheral distribution of lysosomes and bone resorption in osteoclasts. Mechanistically, we indicated that DEF8 interacts with PLEKHM1 and promotes its binding to RAB7, whereas the binding of FAM98A and NDEL1 with PLEKHM1 connects lysosomes to microtubules. Importantly, suppression of these proteins results in lysosome positioning and bone resorption defects similar to those of -null osteoclasts. Thus, PLHKEM1, DEF8, FAM98A, and NDEL1 constitute a molecular complex that regulates lysosome positioning and secretion through RAB7. 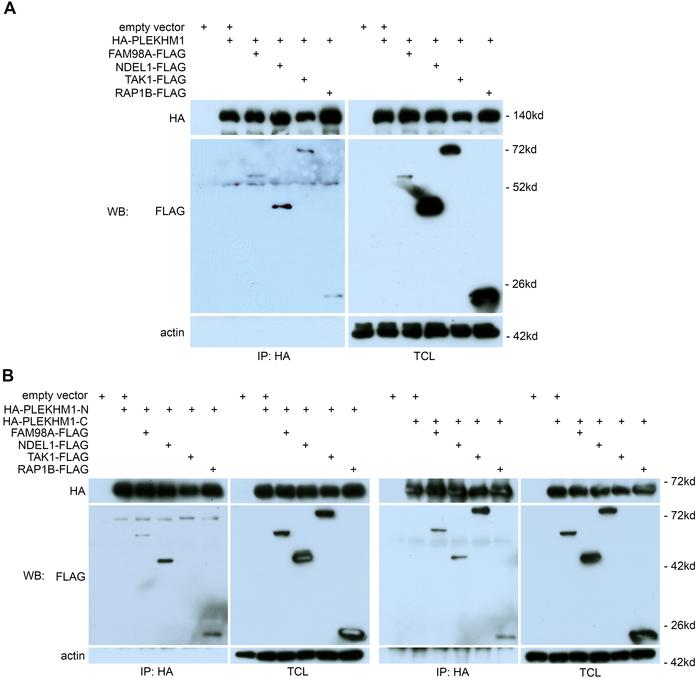 Co-IP of HA-tagged full-length PLEKHM1 () or the N-terminal and the C-terminal portions of PLEKHM1 () with FLAG-tagged FAM98A, NDEL1, TAK1, and RAP1B in 293-T cells. The lysate of empty vector expressing 293-T cells (lane 1) served as a negative control. TCL, total cell lysate. Actin served as loading controls. The experiments were repeated 4 times.