Keratin expression dynamically changes in airway basal cells (BCs) after acute and chronic injury, yet the functional consequences of these changes on BC behavior remain unknown. In bronchiolitis obliterans (BO) after lung transplantation, BC clonogenicity declines, which is associated with a switch from keratin15 (Krt15) to keratin14 (Krt14). We investigated these keratins’ roles using Crispr-KO in vitro and in vivo and found that Krt14-KO and Krt15-KO produce contrasting phenotypes in terms of differentiation and clonogenicity. Primary mouse Krt14-KO BCs did not differentiate into club and ciliated cells but had enhanced clonogenicity. By contrast, Krt15-KO did not alter BC differentiation but impaired clonogenicity in vitro and reduced the number of label-retaining BCs in vivo after injury. Krt14, but not Krt15, bound the tumor suppressor stratifin (Sfn). Disruption of Krt14, but not of Krt15, reduced Sfn protein abundance and increased expression of the oncogene dNp63a during BC differentiation, whereas dNp63a levels were reduced in Krt15-KO BCs. Overall, the phenotype of Krt15-KO BCs contrasts with Krt14-KO phenotype and resembles the phenotype in BO with decreased clonogenicity, increased Krt14, and decreased dNp63a expression. This work demonstrates that Krt14 and Krt15 functionally regulate BC behavior, which is relevant in chronic disease states like BO. 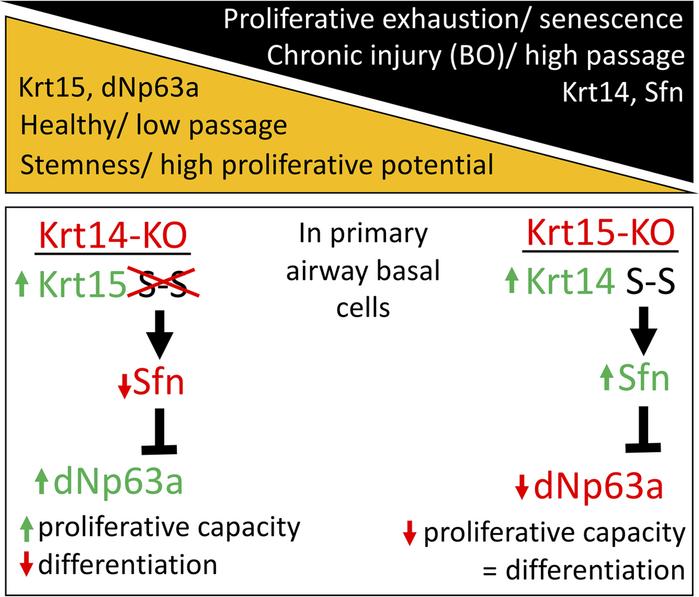