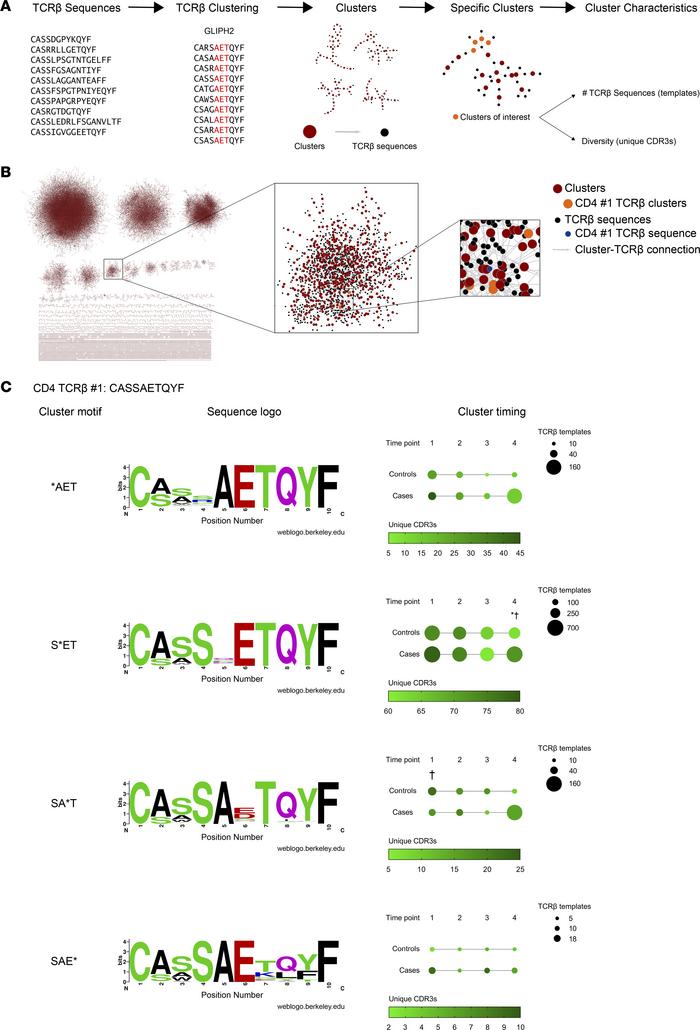 () Schematic depicting the clustering of TCR-β sequences and subsequent characterization of identified clusters containing preproinsulin-reactive TCR-β chains. () A representation of TCR-β chain sequence clustering from a single individual at 1 time point generated using the GLIPH2 program; depicted are 68,639 total clusters from case #16 at time point 3. TCR-β chain sequences (black) are grouped into clusters (red) based upon predictions to bind similar peptides. CD4 TCR #1 (blue) that recognizes insulin B chain amino acids 9–23 were found in 4 TCR clusters (orange) at this time point. () Sequence logos for the 4 clusters that contain the PPI-reactive CD4 TCR #1 showing the frequency of amino acids at each position within the CDR3β sequences (left). Larger letters indicate a higher prevalence of an amino acid at a particular position. Multivariable plots in panels depict the 4 cluster motifs at each time point in controls and cases (right). Dot size indicates the number of TCR-β chain templates composing the cluster, while a darker green color depicts a higher number of unique CDR3β sequences in the cluster (a measure of TCR diversity). Time points in cases: 1, early in life; 2, before islet autoantibody positivity; 3, after islet autoantibody positivity; and 4, visit prior to clinical T1D diagnosis. Controls were age matched at each time point. values were calculated using mixed-effects models to account for multiple measurements and comparisons between controls and cases at each time point for either template number (*) or CDR3β diversity (†). * 0.05, † 0.05. provides full statistics for temporal changes within a cohort and for comparisons between cases and controls.